Numbers Nerds is about girls struggling to find their identities among all the competing pressures of high school. Struggling for the space to be both smart and popular. To be nerdy and female. To be competitive, but supportive friends. To collaborate with people they don't always get along with. To check all the college app boxes but still have a social life and maybe even have time for a little romance. It's about getting over or learning to accept all the myriad anxieties that go along with becoming young adults, and finding your place in the world.

The sound of Numbers Nerds is a little Menken, a little Shaiman, a little Lopez, and of course a little Schwartz. We wanted it to be fun, uplifting, spunky, and catchy as heck. Musically our composer [David Kornfeld] drew from all the pop theatre influences in his arsenal to create a sound that hopefully is fresh but familiar and will leave you singing and snapping your fingers.

Your musical is about an all-girl math team, and in 2017 we are still trying to increase the number of women in STEM fields. Is it important to you to write stories that are politically/socially relevant? 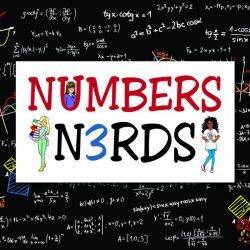 Over the last few years and this past year in particular, it's become increasingly important to write shows that explore socially relevant themes. We're not into preaching a specific moral or message with a show, but rather telling a story that shows the world as it is, with someone trying to change the status quo. We need stories that challenge people to think critically about their place in the world and that encourage empathy for their fellow human beings. So with Numbers Nerds, it was very important from the get go to make sure the story wasn't all fluff and silliness -- that it was built on a foundation of heart and truth. A bit of humor and silliness is a wonderful, healing thing. But for a story to connect with people the characters have to be truthful. They have to be real people, up against real odds and facing internal and external challenges that the audience faces themselves. For the smart girls in our story, the challenge of growing up to become successful women in our society is a very real one, and one that we hope the audience will identify with.

We want girls and nerds (often an overlapping Venn diagram) the country over to have a chance to tell the story of the Waukesha Numbers Nerds with us, and NYMF is a wonderful opportunity for us to see how the show resonates with a savvy musical-theatre audience and to connect with educators, community theatre producers and the companies that license musicals from around the U.S. Plus it's going to be a blast.

I never thought math would win me over, but the day has finally come with Numbers Nerds. This addition to the New York Musical Festival hit all the right numbers with its charming story of friendship, budding romance, and working together in the face of every nerd’s greatest nightmare: public speaking. When the musical starts, the pressure’s on, as an all-girls high school math team faces the final elimination round of regional competition. Melissa (Maisie Rose) has her math skills down, since she aspires to follow in Einstein’s footsteps and become the next math genius, but her public speaking skills leave room for improvement. With all eyes on her, she chokes, and the team loses their chance at advancing to nationals and bringing home a trophy. The image-obsessed Amber (Tiffany Tatreau), who’s determined to keep her rank in the school’s most popular clique despite her inner math nerd, is furious that Melissa turned them all into losers, and votes to kick her off the team. Barbie (Madison Kauffman), a unicorn aficionado, wants to give Melissa another chance, but ambitious, college-driven Mary Kate (Danielle Davila) agrees with Amber, and Melissa finds her math-genius future crumbl …Read more