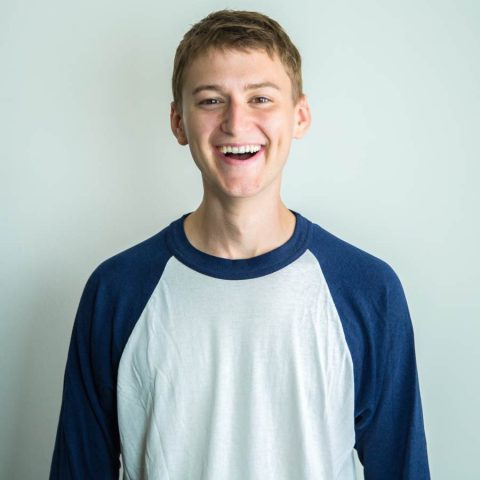 The 2017 New York Musical Festival, which runs July 10 through August 6, will bring audiences four full weeks of new musicals, concerts, readings, and panel discussions. We spoke with Robbie Florian about his musical The Cadaver Synod.

Our show tells the true story of Pope Stephen VII, who, in the year 897 A.D., dug up the corpse of his predecessor, Pope Formosus, and put the rotting body on trial in front of the entire Roman clergy, senate, and aristocracy.  Literally dressed it up in its old Pope clothes, propped it up on a chair, and screamed accusations at the thing for hours while a whole host of onlookers nodded along.  The only person assigned to defend the dead body was a teenage deacon, a sputtering, naive academic facing a righteous onslaught from the most holy and famous man on Earth.

Ultimately, Stephen had the corpse declared guilty of... crimes, and the body was dismembered, disrobed, and thrown in the Tiber River.

We have recreated the trial, and the events preceding and following it, with a mixture of pope-punk, Catholic pop, doo-wop, Gregorian chant, R&B (reverends & bishops), gospel, and much much more.

Les Mis made me fall in love with the form.  But it was listening to Bloody Bloody Andrew Jackson a few years ago, while appearing in Urinetown, that pushed me to write.  After reading about the Cadaver Synod, and doing some independent pope research, certain thoroughly gestated ideas/melodies could no longer be ignored.

It’s like a Swainson’s warble (Limnothlypis swainsonii) meets a persnickety gutter punk (Drainalus hoodlumii) multiplied by a functioning toaster and divided by a pope corpse.

Are there any unique challenges when writing about a historical event?

We have very little information about the Cadaver Synod, from the literal goings-on of the trial to the motivations that set it into motion.  What we do have is removed by at least several decades, and is very likely colored by the politics of the time – historians can only speculate.  However, this provided a unique opportunity to fill in the gaps of an unrecorded age with modern concerns and outlooks, conflating 11 centuries with anachronistic flourishes and the timeworn truths of undeniably cyclical human behavior.

Plus, it was hard to come up with so many synonyms for “pope.”

What are some of the craziest things you discovered while researching for the musical?

The papacy has seen its share of fascinating characters, from the pious and charitable to the diabolically self-serving… enough to write dozens of musicals.

The age in which the Cadaver Synod took place, referred to by scholars as the “Pornocracy” (Saeculum obscurum), was a particularly chaotic period for the Roman Catholic Church.  Competing aristocratic families were casually murdering popes and replacing them with loyal stooges; the seat of St. Peter became marionette theatre.  One particular pair of noblewomen, Theodora and her daughter Marozia, ruled all of Rome by constantly swapping out popes… they each earned the title “senatrix” for their uncanny ability to influence (and dominate) the senate.   Marozia has infamously gone down in history as “Mother, Lover, and Grandmother of Popes.”  She figures into our show as well.

I could go on and on when it comes to crazy papal stories, but my favorite story other than the corpse trial is that of the only English pope, Hadrian IV (born with the incredible name Nicholas Breakspear), who, in 1155, refused to crown the German king Frederick Barbarossa until he helped him down from his horse properly. 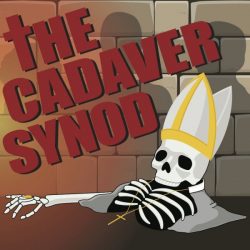 Though the specifics of this strange historical event might seem shocking, we find a surprising amount of parallels between 897 and 2017.  Spectacle over substance, in political, social, and personal spheres, is nothing new, and has taken many shocking forms over the centuries.  The show does not seek to proselytize, teach, or scold.  We simply wish to explore innate tendencies toward control and categorization that end up conflicting with our unique ability to show altruism and empathy, and how a few individuals navigated these trappings while living in a famously corrupt and immoral time.

Also, there's a part where the dead pope's severed fingers come to life as a Ronettes/Supremes-type group and sing about flowers.

We’re looking forward to a Vatican production some time soon.  Frankie has been pestering me non-stop to bring the show over now that curmudgeonly ol’ Benny has taken off to the countryside.  Sounds like we’ll have quite the company!