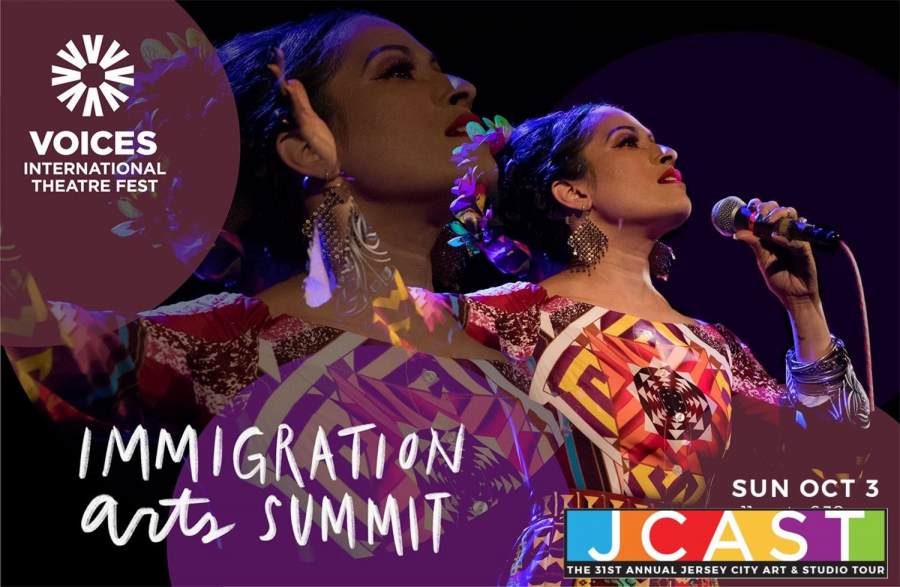 While this Broadway and Off-Broadway season is perhaps more diverse than ever before, it's clear that we still have a lot of work to do. To that end, Jersey City Theater Center is hosting its first Immigration Arts Summit on Sunday, October 3rd. Kicking off the company's third annual Voices International Theatre Festival, the summit will include dance, film, and poetry performances, as well as addresses from speakers like Joseph Patel, one of the producers behind Summer of Soul. According to artistic director Olga Levina, "the Summit celebrates immigration as integral to the DNA of America."

Immigration is also essential to Levina's artistic DNA. Raised in a multicultural Belarusian family, she draws on her richly woven heritage to foster art that is inclusive and expressive of others' stories. Ahead of the summit, I spoke with her about her own experience as an immigrant, the power of art to build bridges, and keeping theatre relevant for future generations.

What's the story behind the Immigration Arts Summit?

In the first place, we started Voices International Festival because I’m very passionate about diversity. I wanted to build a bridge between Jersey City’s diverse community--it’s such a beautiful bouquet of people--and international artists.

Also, as an artistic director, I often found myself kind of lonely. Most artistic directors work in their own communities, in their own language, and they don’t really cross over to work together with other directors and foundations. About 12 years ago, Mark Russell invited me to come to his Under the Radar symposium, and the enrichment was beyond anything I can describe. All these incredible companies’ artistic directors came together to exchange ideas, have workshops, and discuss different themes. I learned so much about our field and about the world, and this is what theatre is all about. When I think about it, if he'd never invited me, I would be very limited. So I wanted to do this for others.

I want artistic directors from other cultures to come together and have this summit where we can exchange ideas, do workshops, hear great speakers, and just learn. It’s so important in our industry because we're always working but we almost never have time for our own enrichment. This is what art’s all about for me: it’s about learning about others. I know my story, but it’s about someone else’s story.

On that note, you have a lot of different art forms represented at the Summit. Why did you feel it was important to include so many diverse artistic disciplines?

I’m an immigrant born in Ukraine who grew up in Belarus, so I have all these different heritages, from Chinese to Russian to Ukraine to Belarus. Growing up I was so confused. What is my identity? What is my story? I was constantly asking these questions. And I grew up in a Jewish family, so we would go every spring to Yama--which is where, when fascists came to Belarus, they killed Jews and threw the bodies into these mass graves.

So I had all these questions: what does it mean to not be accepted in one culture or society? My Russian Chinese grandmother cried all the time saying, I have a hard time praying, I’m not really accepted. Trying to understand, even as a kid, her trauma, and my Jewish family's trauma, I think that my savior was the arts. At my performing arts school, I found myself talking to all these different cultures through music, and relating to them. I didn’t know then, but now I can say, this is what was happening--I saw beauty in all of them, and I was thinking, what if they all came together and saw each other not for their differences but for how beautiful they are?

I was also an only child and my parents divorced, so my family fought over me. I was that bridge to all these different cultures. And I found that art helped me to survive and build those bridges and love everyone. So our mission from the beginning was very—you might say political—to present works that tackle specific issues of our times. We took one word--connections, or truths, or origins--and explored it through all different forms of arts. Because as we know, in different cultures we have different strengths and different expressions.

I also felt even in 2006 that there was going to be a change in theatre. It was an instinct. Although I grew up on classical theatre, I felt like a fish out of water. I said to myself, we can go beyond just the preconceived notion of what theatre should be, to tell the story of all. Because we cannot tell the stories of different cultures if we’re only using the western way of expression. So this is why all the different speakers and artistic disciplines come into play for me personally. When I create, there are no borders. I don’t say to myself, I can't use this or I can't use that. I can use anything. If it exists, those are my tools.

You've got a lot of amazing speakers and performers coming.

I would be lying telling you that, listen, this Belarusian woman came to the U.S. and suddenly she knows all these amazing speakers. No, I work with a team. And this year I worked a lot with Richard Colton who is doing Movement Without Borders, so he brought a lot of the speakers as well.

We have this thing we call circular motion. I don’t believe in hierarchy in a company. I believe in the circular. I believe that every opinion--it can be a tech person or even a bartender--everyone has a say and an opinion. And that say and that opinion and that vision is very important, just like in a family. So I allow everyone to suggest whom we should approach, whom we should bring, whom we should talk to. And it’s amazing the suggestions  people bring to me. This is how I see the future of theater, because from what I understand, we’re losing younger audiences. I believe one of the problems is that we’re not open enough to them, to their opinions. We have to listen more. Although I’m talking a lot right now.

You’re giving me great stuff though.

In truth I believe that if you’re talking democracy or diversity and you don’t say hi to the person who cleans your toilets, there’s no diversity. I don’t believe in that kind of human exchange. I believe that everyone has a place and my place as artistic director is not higher than anyone else’s.

What do you hope people take away from the Summit?

At first we were going to break it into a morning session for professionals and another session for everyone else, but being a small company and this being our first year doing this, we decided we’re just going to do one session that's open to the public. We’re going to go with people who we know are genuine artists and genuine speakers, who have a lot to give.

On the receiving side, I guess it’s up to the receiver. When you put a program like this together, you’re never 100% sure. You basically go with your gut, just like on stage, and you believe that the audience is going to get it. So I'm not going in with any big expectations, but I do believe that each and every one of those speakers can change somebody’s life for the better, because they’re very deep thinkers.

We're wrapping up, but is there anything else you'd like to add?

Just that it's incredible to see theatre changing. I hope that no city in the U.S. lives in the shadow of another city. I hope that every artistic director and community gives people a chance to tell their stories, because this is what it’s all about. It’s about that beautiful exchange.

I hope that in the future, people can use theaters not just as a space where they sit and observe what’s going on onstage, but that we can go back to the fire, to the place of gathering, because we started around the fire in a circle of motion. We have to go back to that. We need more of an opportunity to see life from all different perspectives, and to question instead of just lecturing. We lecture a lot. [laughs].

That’s my vision, not only for my small company, but for the future of the arts in this country. I hope everyone can be included. My father sometimes asks me, are you still in theatre? Because the first generation of immigrants, we don’t do this. We don’t go to the theater. We don’t have a say in society. I believe that the United States lost a lot in not letting that first generation of immigrants have a voice.