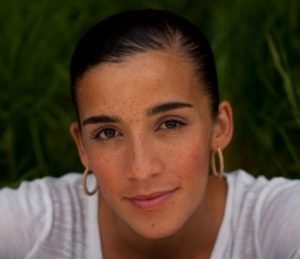 Death by excessive force has been an issue in our American culture for generations upon generations, and in light of recent fatalities in Ferguson and throughout the country, it's important to ask ourselves what we are doing to stop discrimination. Playwright Kimber Lee's extraordinary play brownsville song (b-side for tray) sheds light on the complex life of a victim lost too young.

Director Patricia McGregor orchestrates an exceptional cast of five actors representing the Brownsville community. We spoke with McGregor about how this play engages with the community and its balance of humor, light, tragedy, and hope.

What attracted you to directing brownsville song (b-side for tray)?

I met with Kimber -- the people at the Lark Playwright Development Center put us together a couple of years ago. I trust their taste and they know my work and the work I like to do, and they thought that I would be a good match. And I just enjoyed meeting her as a person, first of all, and seeing the things she was interested in.  [She's] an interesting mix of a writer who has a strong poetic form and also a boxer, so to me there is something about someone who is able to understand both the lyricism and lyrical beauty of the world and [who is] also very grounded with veracity and sight in the world. I'm interested in those tensions and how they manifest themselves theatrically.

I read the script and Brownsville lived on the periphery of my understanding; having lived in New York for 14 years, it was a place that I had heard about but never visited or had an intimate relationship with.  And I feel like theater is a way for the audience and for the artist creating it to have a better understanding, a more full and complicated relationship with individuals or places they've never been, and I was really curious about that. I thought this would be a great opportunity to engage with a community.

I loved within the piece there was a balance of humor, hope and light even as it was addressing some really challenging circumstances specifically with the death of this young man.  Sometimes those stories are told with such monolithic stories that don't acknowledge all of life and the beauty and community surrounding that individual.

As a director, I'm often intrigued by pieces that really need the imagination of a company and a director to manifest the world.  This isn't a play meant to be a television show, it's actually very, very theatrical with the dream sequences, and the pieces that are more abstract are as interesting to me as the parts that are more grounded in psychological realism.  I was not just interested in the subject matter which is very, very timely and I really wanted a place to meditate on this young man and young men that are being shot, taken down by both internal and external forces in the black community; I was interested in formally how to create the real world and dream world of Brownsville that exists in Devine's head. 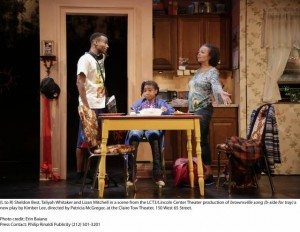 The first day was wonderful, we circled up with everyone.  We had André Bishop (Producing Artistic Director of Lincoln Center) there, we had marketing people, the cast.  It's good to remember that we had all of those hands supporting this piece to get out to the public in the most meaningful way possible.  We ended up having a pretty significant community engagement element with the Brownsville recreational center so it was nice on the first day to know education and marketing were helping to foster all of it.

I never fully know a play until it's cast, and that first day was the first day we had these five actors who end up representing an entire community, an entire ecosystem.  It was wonderful and reassuring to see how talented they are and how much they made each other laugh, how much everyone wanted to be in the room.

Taliyah Whitaker, who plays Devine, is an extraordinary young person, not just a an extraordinary young actor.  We have a little check in where we answer the questions I am... I want... I need... I feel... and her answer summed up the answer in the room.  "I am happy to be here.  I want to do great work.  I need to do my homework to make sure this all works out and I feel really excited to come back tomorrow to begin anew."  I always say I want to work with rigor and love and I feel this company really rose to the challenge.

The play goes back-and-forth in time; how did you get the company on the same page with this complicated timeline?

We made a timeline on the wall of when those things happened, so if we were to go in a linear way everyone would know where we where in the timeline.  We also talked about what are the triggers that caused us to go forward or backwards in time.  Often Devine issued the changes in time, where the points of anxiety or remembrance that caused time to shift and cause Tray to come by in sequence.

We did a lot of improv around scenes you never see in the play that would help build a 'before' and 'after', particularly on scenes that came out of sequence.  We could really feel a relationship between Tray and [Tray's friend] Junior.  The first time we see them it's only a twenty second scene and you really don't hear much of the dialogue there intentionally, you just see them interacting, but we did a lot of improv to see what their earlier relationship would be like and what a typical day would be like. 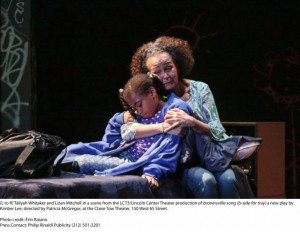 With the different generations in the room between the actors, was there a different way you spoke to them?

I think particularly with Taliyah, when we first talked about casting, we had several conversations if we would need someone older who played younger.  I really believed, having been someone who performed as a kid and took it seriously, that we could find a great young actor, and Taliyah is just as present and intelligent as anyone in the room.  And Lizan Mitchell (Lena) who is the older member of our company, is just as hip with the fashion, times and music, with everything as Chris Myers (Junior) is.  Having those two on the far end of the age spectrum meant we were a company who didn't have to change our language on the way we spoke about things.  We see that in who Lena is: the first time we see her having this intense confrontational monologue and the next time we see her she's in this pink sweatsuit doing zumba, and that spoke to me with the kind of actress we wanted to cast.  We always would joke that Taliyah was the secret dramaturg because she has such insightful questions.

What is your personal takeaway from brownsville song?

We need to be very mindful not to believe the kind of collapsed character attacks that are happening in the media a lot, where somebody who has been the victim of the crime is being betrayed and demonized in ways that are really problematic and stir up the racist underbelly that we still need to deal with as a culture.  This is to make the statistic a real human being with all the beauty, possibilities, complexities so we can feel the tragedy, celebrate the individual and feel the tragedy, and not just have it as a statistic.  These characters in this play are trying to lead with love and forgiveness and the tragedy happens that cuts Tray's life short. He is someone we should celebrate because he was exceptional at showing love and forgiveness to those around them.