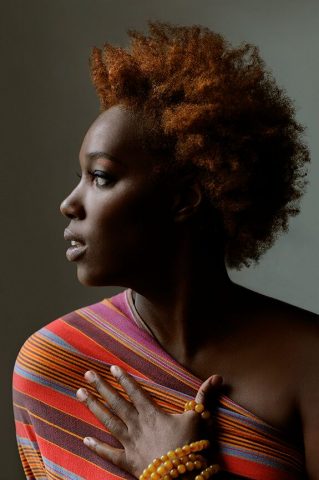 The National Alliance for Musical Theatre will hold its 29th annual Festival of New Musicals on October 19 and 20 at New World Stages. GIRL Shakes Loose, by Imani Uzuri (music/lyrics), Zakiyyah Alexander (book/lyrics), and Sonia Sanchez (poetry), is one of eight new musicals this year.

GIRL Shakes Loose is a three-city coming of age journey. Girl finds herself in New York, unemployed, suddenly single and must figure out where she’s going and why she keeps making the same mistakes. It’s up to Girl to figure out where home is and how (and if) she’ll get there.

A rainstorm meets an epiphany.

What were the first musicals that made you want to make musicals?

The Sound of Music, Les Misérables, Hair, A Chorus Line, The Wiz, Rent.

Who are your favorite classic musical theater composers/writers?

And your favorite composers/writers working today?

What's one thing you would change about the current state of musical theater?

The lack of diversity and parity from writers/composers.

Why is it important to bring your show to NAMT?

We think the show needs to be seen, and is unusual and exciting.

Interview: Imani Uzuri on ‘The Gypsy Diaries’, Quilt Making, and Diversifying What the American Songbook Means

Imani Uzuri is redefining the concept of world music by following the great tradition of female African American musicians like Bessie Smith, and adding a cosmopolitan flavor that doesn’t only enrichen her gospel, soulful flavor, but makes it sound fresher than it ever has. In her second album, The Gypsy Diaries, she incorporated instruments and sounds from Eastern Europe, Japan, Morocco and India, to make textures so complex you feel you could almost touch them. Her haunting lyrical work covers subjects like social injustice, lost love, and in the riveting “Soul Still Sings” she pays a beautiful homage to her grandmother. As Uzuri comes to represent the ever changing voice of American music, it’s only fitting she will be performing as part of Lincoln Center’s American Songbook series on March 31. To celebrate her concert, we spoke to her about her influences, her creative process and her exciting upcoming projects. This will be your first show as part of the American Songbook series at Lincoln Center. Are you excited? This is one of my most exciting shows. I was so happily surprised when I got the call from the curator and producer. You’re often compared to Bessie Smith, and you k …Read more