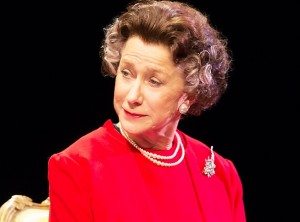 SEE or SKIP: The Audience

INFO: Broadway continues its slavish Anglophilia with this look at the long reign of Queen Elizabeth II. Still in power at age 89, HRH came to power in 1952, when an aged Winston Churchill was still Prime Minister. The plot of Peter Morgan’s drama, The Audience, charts Elizabeth’s weekly meetings with all her PMs (nearly a dozen), including, for example, frosty exchanges with Margaret Thatcher and surprisingly convivial ones with Harold Wilson. Though technically just a political figurehead, the Queen still has a place in British society, Morgan’s play seems to say, but what that place is shifts and evolves with the times.

SEE because:
Who wouldn’t want to be a fly on the wall in Buckingham Palace, watching how the queen regnant balances professional etiquette with the occasional dip into informality?

Simple as the staging is (by director Stephen Daldry), we do get a feeling of being in a spacious, forbidding yet fascinating, place, thanks to Bob Crowley’s settings.

Helen Mirren (duh!). From the get-go, we just assume she is the queen—no acting necessary.

If he’d chosen to, playwright Peter Morgan could have simply adapted his screenplay for the terrific film, “The Queen,” which also starred Mirren as Ma’am, into a stage vehicle. Instead, he tells a totally different story about the same lead character. In fact, “The Audience’s” queen is far more sympathetic than the monarch of the film.

The Queen’s growing friendship with PM Harold Wilson (Richard McCabe), limned in three scenes, is not only amusing and touching, but as close as the show gets to a story arc. At times, I wished the whole play were telescoped into just the two of them.

SKIP because:
Alas, unlike “The Queen” film, The Audience lacks forward momentum. The film showed how Tony Blair coaxed the Royal Family into responding in a publicly humane way to the death of former princess Di. The play just shows numerous conversations, out of chronological order, relating to different periods of modern English times.

The scene with Maggie Thatcher (Judith Ivey, who looks and acts like something out of the Spitting Image puppets), which should be a cornerstone of act two, blows by and makes almost no impression.

Again because of the non-plot, the show is rarely gripping. It’s usually interesting, often engaging, but almost never has a must-see aura.

Caveats about the lack of a driving motivation for the main character aside, it is nonetheless entertaining to watch how Peter Morgan’s Queen Elizabeth treats her many different ministers. And, as said above, the byplay between Mirren and McCabe is a treat. True, the play is nowhere near as good as the movie, but if you’ve seen one, you probably owe it to yourself to see the other.