May 1, 2015
Theater Feature
SEE or SKIP: The Heidi Chronicles 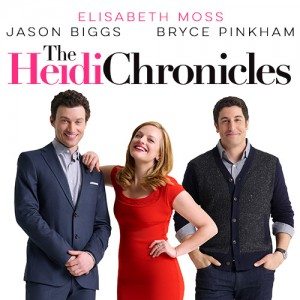 SEE or SKIP: The Heidi Chronicles

Even if the play were merely an important-for-its-time time capsule (which it isn’t), Wasserstein’s intelligent look at the way personal goals and societal expectations both meet and clash remains engaging.

As other critics have pointed out, Elisabeth Moss/Heidi has a very effective “breakdown” monologue in act two, wherein the formerly passive heroine cuts through some of the static in her life.

Jason Biggs, of “American Pie” fame, is surprisingly strong as Scoop Rosenbaum, Heidi’s on-again, off-again lover. Scoop, as a character, is likeable and jerky at the same time, and Biggs balances that throughout the play.

For all its surface wit, the play has layers and metaphors to spare. For example, the last scene has Heidi, the art historian, starting her life over in an empty, white living room.

The whole production at the Music Box feels glib and bloodless. We watch but almost never care about the people or the stakes.

Elisabeth Moss has her moments of depth and radiance, but for more than half the play, Heidi feels like a secondary character. Yes, Ms. Holland is as much observer as protagonist, but she still needs to be somewhat more present. (Moss’s mousy voice doesn’t help.)

For all Wasserstein’s brilliance and humor, as dramatic writing, The Heidi Chronicles feels patchy. Some dialogue feels like the author venting, other lines feel tossed at the audience for obvious laughs, while other exchanges scream “theme” instead of digging deeper into people.

Bryce Pinkham, of A Gentleman’s Guide… fame, starts out delightfully as Heidi’s oldest (and, ultimately, gayest) best friend. He’s got charm to spare and very much enlivens act one. But act two finds him either mugging (also an occasional problem in “Guide”, where it was more acceptable) or turning unconvincingly dark. Yes, the AIDS crisis knocks him for a loop, but his crucial Christmas scene with Heidi just doesn’t work.

Despite a reasonable number of laughs and good scenes, the evening feels overlong and kinda blah. Honestly, I got a better sense of female bonding and empowerment from seeing (gulp) Mamma Mia! again. It’s easy to give Heidi R-e-s-p-e-c-t, but they should Do Right by this woman more than they did this time.