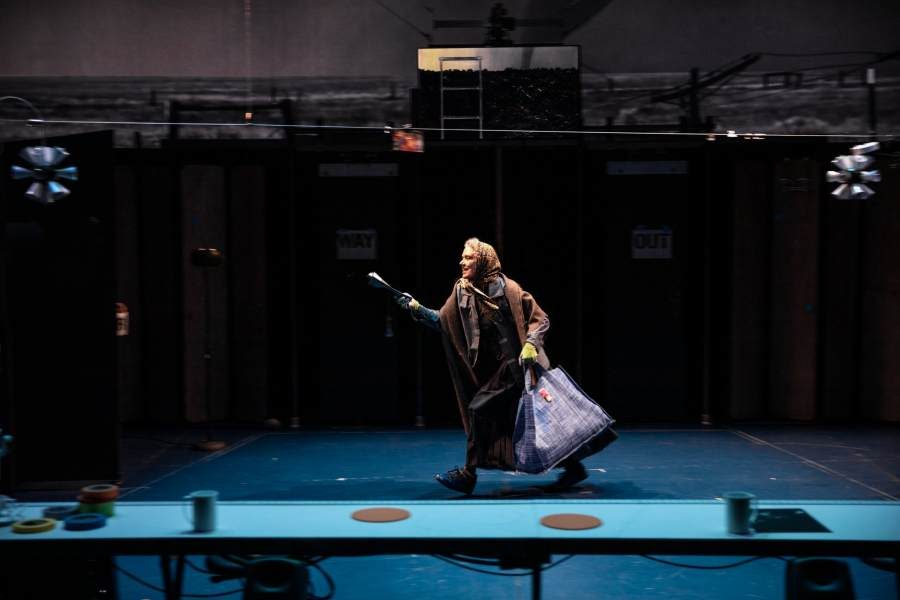 The playbill for Bertolt Brecht’s play The Mother suggests immediately that the drama at The Performing Garage will be unique. Brecht himself noted that the aim of the play is not to entertain, but rather to “teach certain forms of political struggle to the audience.” The intended audience was mainly women.

Presented by The Wooster Group with a cast of five, four of whom play multiple roles, the story is of one poor illiterate mother Pelagea Vlasov  (Kate Volk) whose son Pavel is involved with workers protesting their wage cut. Initially, she doesn’t understand their protest, saying that the factory is the owner’s property and he can do what he wants. She is convinced to hand out leaflets announcing a strike, and later, after learning to read and write, becomes a leader of the revolution. Referred to as “The Mother” by the workers, she is totally focused on the goals of the revolution. In fact, she appears more concerned with the protests than with her son who has been imprisoned.

The show is bare bones, and director Elizabeth LeCompte notes that the play was mounted in the “the spirit of repurposing “ with almost everything used in the play, actors, props, etc, having been used by the theater company before.  Jim Fletcher appears as The Teacher and serves as a narrator for the audience explaining the framework of the story as well as its history.

There are 11 song titles performed throughout the scenes, but they can hardly be labeled as traditional songs. Most were merely a line or two and atonal (original music by Hanns Eisler and new music by Amir ElSaffar.)

Volk speaks with no affect and is almost robotic most of the time. The only time she shows emotion is when she learns that her son has been murdered. Even then, her screaming is piercing, unnatural.

As a learning play, The Mother works. I did learn about Brecht, the Russian Revolution and communism. And although I did learn something, I’m not sure I really cared.With a little more passion from the stage, perhaps I would have.

Assassins
The Search for Signs of Intelligent Life in the Un...
Mrs.Warren’s Profession
Fairycakes