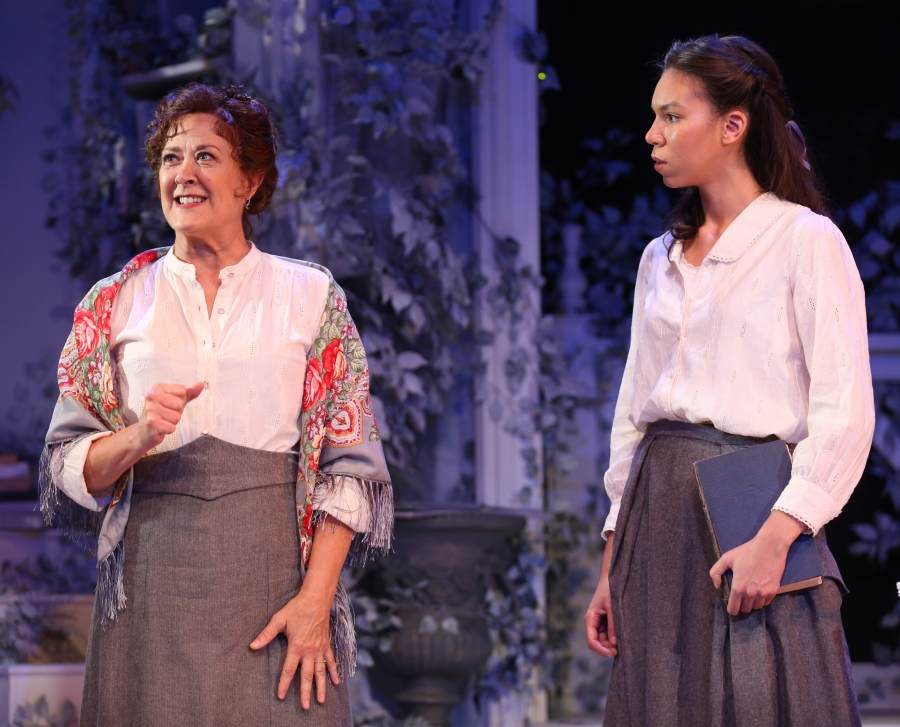 The playwright George Bernard Shaw must have been a feminist long before the movement became popular. He used his plays to decry the few opportunities for women and observed how they were being abused. His response was to create strong independent female characters in his plays.  Although viewers wish for a happy marriage for Eliza Doolittle in “Pygmalion,” she chooses her independence instead. The women in “Mrs Warren’s Profession,” ending its brief run at Theatre Row, are even stronger. Mrs Warren and her daughter Vivie realize that they don’t need to rely on anyone other than themselves.

Having completed her college with honors, Vivie (Nicole King) plans to work at a profession she loves. She isn’t looking for courtship and romance. She barely knows her mother at all having been away at boarding school and then college. As the play opens, she awaits a visit from her mother, who is accompanied by two gentlemen friends. One is Sir George Crofts (Robert Cuccioli) and the other is Praed (Alvin Keith.)  A third character, Reverend Samuel Gardner lives next door but is obviously an old acquaintance.

As the story progresses, Vivie is shocked when her mother (the wonderfully talented Karen Ziemba) reveals her background. Having learned early on that pretty girls are used by men for their beauty and youth, Mrs. Warren and her sister go into business for themselves. Although Vivie is shocked, she understands her mothers’s choices. Later when she realizes to her consternation that her mother is still in ‘business’ and won’t give it up, the two women part- each to be independent. Shaw never has his characters actually say that Mrs Warren is involved in prostitution yet the message clear. Shaw believed that prostitution was not caused by moral failure but by necessity. So the audience feels ho disdain for Mrs. Warren for her profession.

Vivie doesn’t know who her father is, but we assume it’s one of the three men we’ve met.  When the revelation is finally made, it has no real impact on the play, except for Frank. He’s a real gadabout who is living with his father, the Reverend. Frank (David Lee Huynh) is courting Vivie primarily for her income and is quite upfront about it.

The three older male characters reflect levels of society. Shaw creates the avarice nobleman who is in partnership with Mrs. Warren. He offers Vivie a proposal of marriage that is like a business proposition. There’s the inept clergyman who turns to the church when he has no other option and then there’s the artist who claims to see only beauty.

Running at 100 minutes with no intermission, the play feels lengthy, especially because it’s all talk and no action. The two women are well-written characters played by two talented actresses. Ziemba, always a delight, is lusty, earthy, and sexy when she turns on the charm. She manages to be feminine yet strong at the same time. Nicole King, making a fine Off-Broadway debut, does well in her confrontations against the more experienced Ziemba. One running joke is Vivie's very firm handshake, and each man grimaces after shaking hands with her. The male actors, on the other hand. aren’t as effective. They over-enunciate, perhaps trying to sound British, and Huynh, in particular, is grating, constantly smirking as he shouts out his lines. Recalling the intimacy of the theater, David Staller should have directed his actors to speak more conversationally.

Shaw is pedantic and long winded and the show felt especially repetitive. Shaw’s message is clear as he shoots barbs at all classes of men forcing women to make difficult choices to survive. Undoubtedly, the playwright  would have approved of the two actresses cast to play the lead roles and although the actors are weaker, maybe that, inadvertently, proves his point. After all, the women are our heroines.

Assassins
The Search for Signs of Intelligent Life in the Un...
Fairycakes
Bertolt Brecht’s The Mother ( a learning Pla...