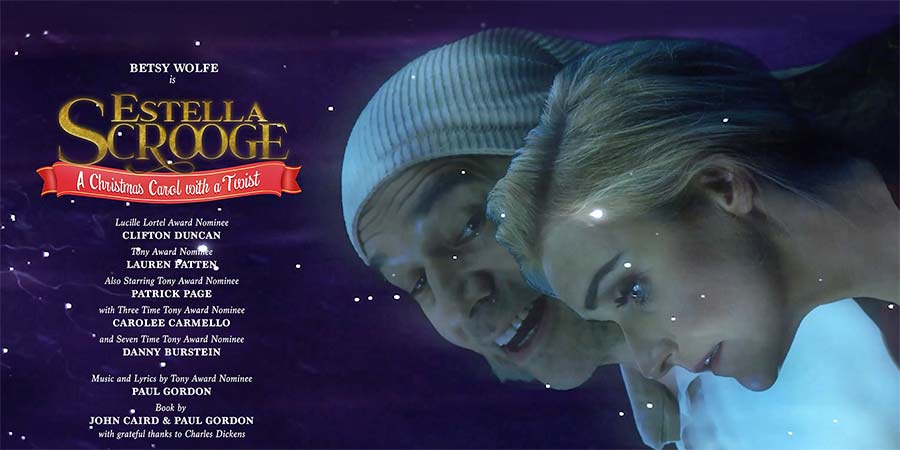 Everything old can be new again with creativity. The question is how to make the traditional relevant and, more importantly, how to attract paying viewers.

John Caird and Paul Gordon collaborated to create Little Miss Scrooge, a combination of Charles Dickens’ A Christmas Carol and Great Expectations. Their musical was presented onstage in 2013 in California. Now presented by Streaming Musicals, the show has been rewritten and re-titled Estella Scrooge in a film version. It includes some modern references about a flagging economy and the postal service.

Having done no prior research, I expected a version of A Christmas Carol with a female main character. As the show unfolded, it became obvious that Estella Scrooge actually combines two of Dickens’ major works. The characters of Great Expectations are integrated with the well-known story of A Christmas Carol. In addition, the show includes characters from several other Dickens’ books.

Estella (Betsy Wolfe) is an orphan is raised and groomed by Miss Havisham to hate men and to be cold and cruel. She is CEO of Bleak House Capital, a financial firm, and she is motivated solely by money. On Christmas Eve, she flies to Pickwick, Ohio where she was raised, to deliver the news of an eviction of a hotel. She discovers that it is run by Pip Nickleby (Clifton Duncan.) Pip and Estella grew up together. The hotel is filled with misfits who sing, explaining that they are ‘almost a family.” Altruistic Pip explains that ‘we always have room for people in need.” And what an interesting group of people they are, including Molly who never speaks but serves invisible tea and invisible cupcakes, Mercy and Charity, a pickpocket named Dawkins and Smikes.

A storm forces Estella to stay over at the hotel where she first meets the ghost of Miss Havisham (Carolee Carmello) and then the ghosts of Christmas Past (Sarah Litzsinger as Sissy Jupe from Hard Times,) Christmas Present (Danny Burstein as Estella’s relative Ebenezer Scrooge,) and Christmas Yet To Come (Patrick Page as Mr. Merdle from Little Dorrit.)

The film feels too long. Perhaps it’s because there is so much going on. There’s a predictably happy ending. Tiny Tammy gets good medical care and survives, and Estella changes her bleak future.

The advantage of mixing so many characters from a myriad of books is that Caird can use talented actors to perform in a film where normally there wouldn’t have been parts for them. From Jagged Little Pill, Lauren Patten (Dawkins) sings “Barbie Doll” mocking Estella in her “high heels, red rouge.” Willow McCarthy (Matilda) plays Tiny Tammy in a solo in the cemetery bemoaning the life she didn’t get to live.

The best part of the film is the technology. Unlike zoom shows where characters remain in their own frames, these characters appear to be interacting with, and even handing objects to others. The doorman gives Dawkins a Christmas present of a Brooklyn Dodger baseball cap, a fitting gift for The Artful Dodger. Phoenix Best (from Dear Evan Hansen) plays two roles, Charity and Mercy, and appears on screen in both roles at the same time. The performers performed their parts in separate locations. The only time characters actually make contact is when Betty Cratchet (Megan McGinnis) kisses her husband Bob (Adam Halpin).) McGinnis and Halpin are married in real life.

I’m not sure if Estella Scrooge will ever become a holiday favorite. Dickens’ work is often quite dense and the plotlines are convoluted, making it difficult for children. The cleverness of using characters from different books is lost to the viewer who is not familiar with them. The stories are complicated and at times the visuals become overwhelming.

A Christmas Carol is a tradition and a holiday staple. Although it can be dark and frightening, it provides hope and holiday spirit. Great Expectations makes the plot line more complicated to understand. At our house,three generations watched the film together. The bright seven-year-old needed a lot of explanation and had several questions, yet, at the end, she announced that she liked it.

Directed by John Caird with music and lyrics by Paul Gordon, the film runs 140 minutes.
The producers of Estella Scrooge created a Theatre Affiliate program in which theater receive 30% of sales of tickets with no risk or cost to the organization. The program encourages audience members to purchase access to Estella Scrooge through their local theater company. The pandemic has wreaked havoc in the theatrical world and theaters are suffering financially so purchasing a viewing help local theater.

Tickets are $29.99 for 72-hour viewing for each household, or $44.99 for a VIP Premium Theatre Experience, which includes unlimited viewings, a download of the cast recording and exclusive behind-the-scenes footage.

A unique take on combining theater and film. See more at the link: