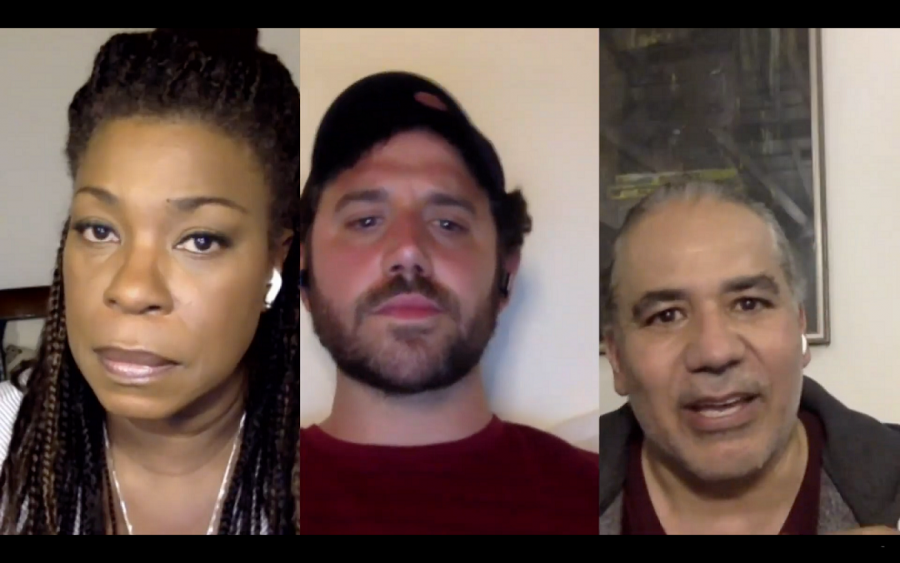 I challenge you to watch The Line, streaming on The Public Theater site or YouTube, without being emotionally moved.

Presented in the documentary style they used so successfully with Exonerated, Aftermath, and Coal Country, Jessica Blank and Erik Jensen, turn their attention to Covid-19 with The Line. We are bombarded daily with statistics about the rising number of cases and deaths caused by the virus. Although mind-boggling, the numbers are still only numbers. The Line makes the pandemic startlingly and heartbreakingly personal by presenting the people dealing directly with it. Using interviews with health-care workers and without creating composite stories, the writers highlight seven people and personalize their harrowing stories.

Excellent professional actors portray the doctors, nurses and EMTs who deal with patients. These are the people on the front line, and if it sounds like war, it is an image reinforced by Ed, a paramedic with 26 years in war zones. Played by Jamey Sheridan, Ed describes thriving on chaos on the battlefield but notes that this is totally different because, at least, in war, you see the enemy.

The one-hour play begins slowly and matter-of-factly as each character, (recorded individually from his or her home) explains why he got into health care. Skillfully directed by Blank, the show builds in intensity as the pandemic grows and the number of emergency calls skyrockets to as many as 7,000 a day. As the workers get more visibly upset, the audience reacts as well.

A couple of the medical personnel get the virus themselves. A nurse, Sharon (Lorraine Toussaint) becomes deathly ill and returns to work only to learn that many of her geriatric patients have died from the virus. Some describe losing patients and the difficulties of having to tell family members. An EMT, Oscar, (John Ortiz) barely keeps his composure when he explains how much pressure he is under to work with patients. With numbers rapidly increasing, EMTs only have 20 minutes to revive a patient when they normally have 40. Oscar triumphantly tells of reviving a patient at 19 minutes, but he is crestfallen when he brings him to the hospital to be told there’s no bed for him. The patient ultimately dies.

As a Jewish nurse, Santino Fontana describes how his uncle died in another hospital, and his aunt and the family weren’t able to sit shiva to mourn him. Dwight, a Jamaican nurse, portrayed by Nicholas Pinnock, tells how he broke the rules to give grieving family members a chance to say goodbye to a dead family member.

The health care workers reinforce a similar theme and that’s the disparate effect the virus is having on the black and brown communities. While many people are quarantining, some of the patients share small cramped apartments with several family members. Throughout it all, Vikram. an Indian doctor, (Arjun Gupta) notes how the virus is ravaging the underserved populations. Although he’s called a hero, he notes that the food delivery drivers and supermarkets clerks are true heroes.

How can you tell people they are heroes but not give them the proper equipment to protect themselves and to care for their patients? Forced to be creative, a young resident (Alison Pill) angrily describes creative attempts to keep people alive. Her face bears the indentations of a safety mask she’s been wearing for hours.

Like the pandemic itself, the pacing of the show, under Blank’s skillful direction, picks up as the performers grow upset. The description on the Public Theater site indicates that these workers are “in a system built to serve the bottom line.” Many of us complain of boredom and not being able to go to our favorite restaurants or to travel. The Line puts things into perspective. We may be staying home but at least we are safe and not on the front line.
There are many streaming programs available, but The Line is one well worth watching.

The show is streaming for free on The Public Theater website
(https://publictheater.org/productions/season/1920/the-line/ ) and on YouTube and has been extended until September 1. The program encourages viewers to donate to charities supporting health-care workers, specifically The Physician Affiliate Group of New York (PAGNY) PAGNY and Public Health Solutions (PHS)

A Letter To Harvey Milk
John Cullum: An Accidental Star
Estella Scrooge “A Christmas Carol with a Twist”...
POTUS