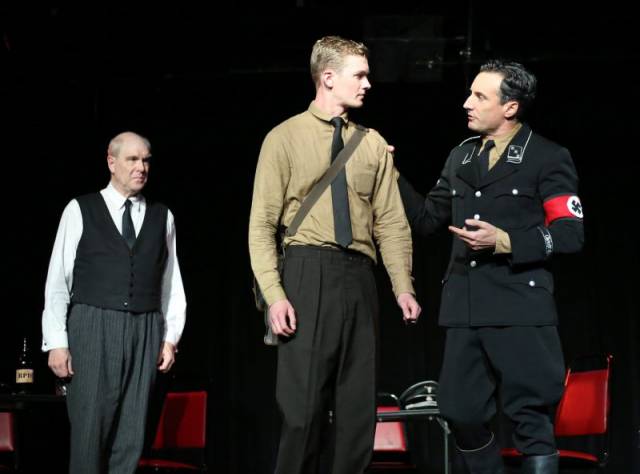 The Players Theatre is currently alive with the sound of music, thanks to The Radicalization of Rolfe, a new play by Andrew Bergh currently on at this year’s New York International Fringe Festival. Taking on one of the most iconic shows in history from an unexpected perspective, this witty yet hard-hitting play is sure to appeal to anyone who knows their Do-Re-Mi's.

Directed by Abigail Zealey Bess, The Radicalization of Rolfe is a retelling of Rodgers and Hammerstein’s classic musical The Sound of Music from the perspective of Rolfe Gruber (Logan Sutherland), the teenage—17 going on 18, to be precise—messenger boy whose budding romance with Liesl von Trapp goes awry as he shifts his allegiance to the Nazi Party. Bringing in other minor characters from the classic tale, including the von Trapp’s domestic staff Franz (Jay Patterson) and Frau Schmidt (Polly Adams) and Nazi leader Hans Zeller (Dominic Comperatore), the play tells the story of Rolfe’s growing allegiance to the Nazi party—and the hidden “deviant” feelings that could put his bright Aryan future in jeopardy.

Set against the backdrop of the classic musical’s dramatic arc, there are plenty of knowing winks to the audience here to entertain Sound of Music fans. The off-stage actions of the von Trapps are constantly mentioned, from the governess’ arrival to the von Trapp children’s musical education, and tiny references abound—at one point, Rolfe declares that Liesl “smells clean and bright, like edelweiss,” while Frau Schmidt praises Maria’s “confidence.” Though these references certainly stand out, they don’t feel out of place with the rest of the play, whose witty tone makes the show a pleasure to watch. As the titular character, Sutherland brings an easy charisma to Rolfe, making him a far more endearing character than his original Sound of Music counterpart.

At the same time, though, the production deals with some heavy subject matter, and The Radicalization of Rolfe manages to balance its wit and cheery showtune references perfectly with its weighty take on the Nazi Party’s rise. The production shows the dangerous allure of the Nazi Party for Rolfe, as he believes it will help him secure professional success, while the tender happiness Rolfe finds in his forbidden homosexual relationship makes the terrifying consequences of the Party’s rise all too clear. This nuanced view humanizes Rolfe while never sugarcoating the material, and the production unsettles even as it entertains. This balance between light and dark is perfectly struck by Comperatore as Herr Zeller, whose dryly humorous portrayal feels at once charismatic and deeply sinister.

Though they’re mostly known now for being light, escapist fare, Rodgers and Hammerstein’s shows used musical theatre to explore heavy themes of societal intolerance that pervaded their post-war society—and unfortunately still feel relevant today. By tapping into both the joy of the original musical and the darker themes that lie beneath, The Radicalization of Rolfe captures Rodgers and Hammerstein’s iconic work in both spirit and subject, evolving it into a clever, nuanced work that may become one of your "favorite things" at this year's Fringe.