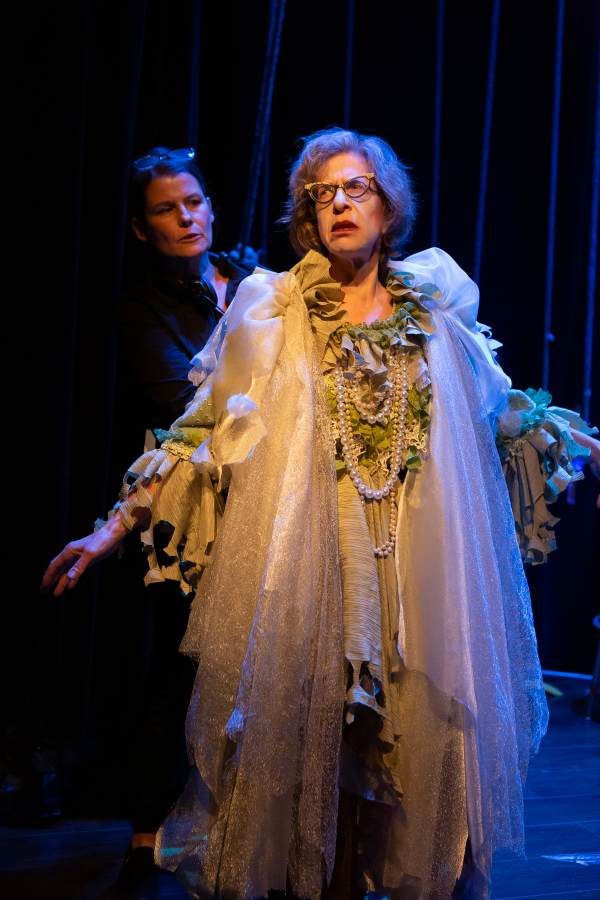 It almost felt normal. Although we had to wear masks to enter the theater and show proof of vaccination to get our seats, we were actually in an Off-Broadway theater sitting next to other patrons.

Suddenly the house went dark and Fruma-Sarah (Waiting in the Wings) began!

In Fiddler on The Roof, there’s a scene where Tevye needs to convince his wife that their daughter should marry Motel, the tailor instead of Lazar Wolf. So he pretends to have a nightmare about Wolf’s dead wife. While the wife’s part is small, it is an exciting and splashy one, as a spirit who shrieks as she threatens unless she’s obeyed. Making a dramatic entrance, flying up from the grave, she is a strident and angry ghost.

In the Off-Broadway show, Fruma-Sarah is played by the irrepressible Jackie Hoffman. As Ariana Russo, a miserably unhappy woman who spends the entire first hour and 7 minutes of the play, she sits backstage impatiently waiting for her entrance. She is yoked to a harness controlled by the fly captain. Tonight there is a substitute captain, creating the creative opportunity for Ariana to share her sad life story.

After many year of happy marriage, Ariana discovered that her husband was gay. She is now divorced and bitterly estranged from her married daughter. For a while, Ariana found comfort in the theater community, even though it’s only in Roselle, NJ. Theater becomes her refuge and at that point, the show seems to be a love letter to the theater. Eventually Ariana’s anger and pettiness caused her to develop a reputation as difficult to work with. So now even theater isn’t making her happy.

In a two-person play, Hoffman is the indisputable star with Kelly Kinsella playing Margo, the substitute fly captain. But it is totally a vehicle for Hoffman.

Russo complains about everything and some of which makes her unhappy is justifiable. But eventually one tires of her bitterness. Fueled by the alcohol she consumes, she goes through a series of tirades and we no longer feel sympathy for her. Towards the end, the play turns very dark.

The best parts of the play are when Hoffman can be outrageous. When she does her vocalization exercises (“red leather, yellow leather, unique New York,”) she’s hysterical. Everything is larger than life and exaggerated. As an Italian portraying a Jewish character, she mispronounces the characters’ names. There’s also some subtle theater humor with references to Equus and David Mamet.

The premiere of the play by E.Dale Smith with original concept and direction by Braden M.Burns runs about 70 minutes and is done in real time with the strains of Fiddler on the Roof occasionally wafting in. The show is uneven and basically unsatisfying. It’s about theater, loneliness and unhappy people, but it's hard to care about Ariana. She’s too busy blaming everyone else.

When Kinsella gets her big speech, explaining why she’s refused an exciting opportunity working as a stage manager on the road, the play really slows down. But it’s not her fault. Her role isn’t flashy and Hoffman is dynamic, even sitting still.

Although there are two performers onstage, Hoffman, dressed in a tattered, gauzy ‘rented’ costume and yoked to the harness, had a brighter spotlight on her than did Kinsella. But, quite frankly, Hoffman didn't need it. Her comic talents shine brightly anyway.

How wonderful to be back!

Fairycakes
Assassins
The Search for Signs of Intelligent Life in the Un...
Mrs.Warren’s Profession