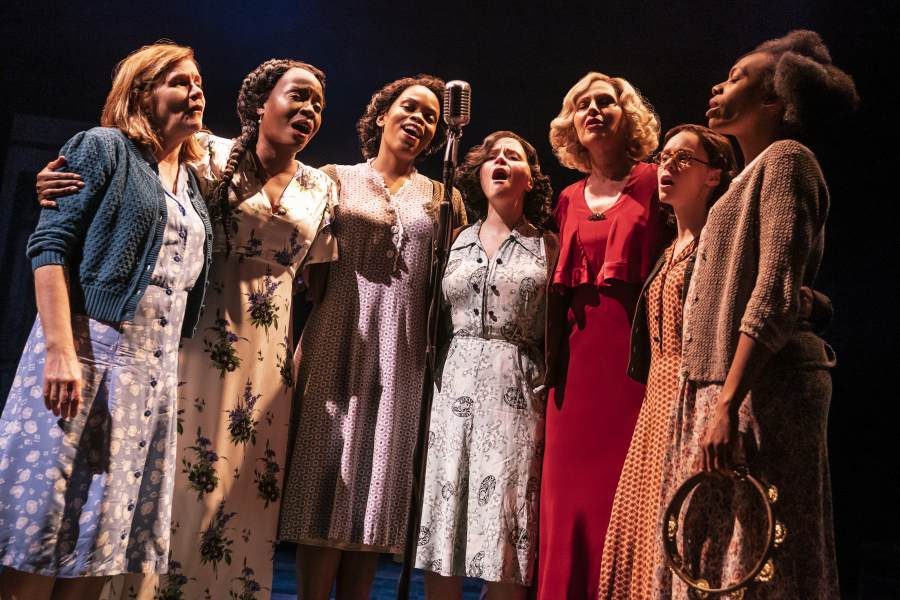 A group of characters gather at Laine's boarding house. They are running away from something or to something. It is 1934 in Duluth, MI, ( actual birthplace of Bob Dylan) and people are still reeling from the aftermath of the Depression. Written and directed by Conor McPherson (“The Weir,” “Shining City,” and “The Seafarer,”)  “Girl From the North” is a series of quiet and intimate personal stories, rather than one connected narrative. Fortunately for the audience, it’s all done to music, 21 Bob Dylan songs. You don’t have to be a Dylan fan to fall in love with the musical now playing at the Belasco Theatre.

There’s a comforting familiarity to the show. When Dr. Walker (Robert Joy) takes the microphone, setting the scene for the audience; he is reminiscent of the Narrator in “Our Town”, but he’s also a character in the story. “I’ll come into the story later.” A morphine addict, Walker appears a few times, moving the action forward and even concluding the play, telling us what happened afterwards even though he has “been dead for 12 years.”

Laine (Jay O. Sanders) is barely making ends meet and is in danger of losing the house to the bank, yet he doesn’t hesitate extending credit. Shortly after telling her husband she no longer loves him, his wife Elizabeth (Mare Winningham) gets sick. Her dementia leads to her erratic behavior, yet Laine remains with her out of compassion. They have an alcoholic son Gene who needs a job and their pregnant black adopted daughter Marianne (Kimberly Elayne Sprawl) who refuses to name the father. So Laine is trying to marry her off to Mr. Perry, an older widow.

Marlowe, an itinerant Bible salesman/ preacher appears and rents a room. A boxer,  Joe Scott (Austin Scott,) comes from the same train. Wrongly imprisoned, Scott has been released from jail and is making his way to Chicago.

Mr Burke (Marc Kudisch) and his wife (Luba Mason) enter with their developmentally challenged adult-son Elias. (Todd Almond.) Of course, there’s a story and a reason that they are on the run. When Elias viciously grabs at his father, it is evocative of Lennie in Of Mice and Men. Could Elias have done something horrible to a girl?

And there are others - each unhappy and searching.  Characters have their stories, the pasts that follow them around. The individual histories are dark and sad and even those with slim hopes of connection, like that of Marianne and Joe, don’t bode well.

All are set to Dylan’s haunting music, often lyrically suggesting longing and loneliness. At times, a song fits the situation, like when Gene says goodbye to his girlfriend who’s leaving for a job and a husband. Together the two sing a movingly beautiful version of  “I Want You.”

The performers are wonderful, and Winningham is a revelation! Having seen her as an actress, I never realized how good a singer she is. She performs a couple of solos and then sings with the ensemble of female singers that huddles around a radio microphone. Winningham’s versions of “Forever Young” and “Like A Rolling Stone” will stay with you.

Often the problem with jukebox musicals is a production ‘force feeding’ songs to fit the script. So unless the music is organic, as with certain shows about performers like “Jersey Boys” and “Beautiful,” the music detracts and doesn’t feel natural. In “Girl…” even if the music is not integral to this story, it works, almost as if it’s the background music of the characters’ lives.  Although some of Dylan’s work will be familiar, the renditions are different. You may hear several songs that you don't recognize, but you will still appreciate the  music.

The scenic and costume design are by Rae Smith with orchestrations, arrangements and music supervision by Simon Hale.

At the conclusion, Walker tells us that the scene we are witnessing is the last time these characters will all be together. Rather than have us leave on a sad note, the show presents its final song when Jeannette Bayardelle sings “Pressing On” accompanied by the entire cast in a rousing gospel-like song. We leave the Belasco Theatre, once again overwhelmed by the talents of Broadway performers and the music of Bob Dylan. We, too, will press on even though it gets  “Lonely early, doesn’t it?/ Ev’ry single endless day.”