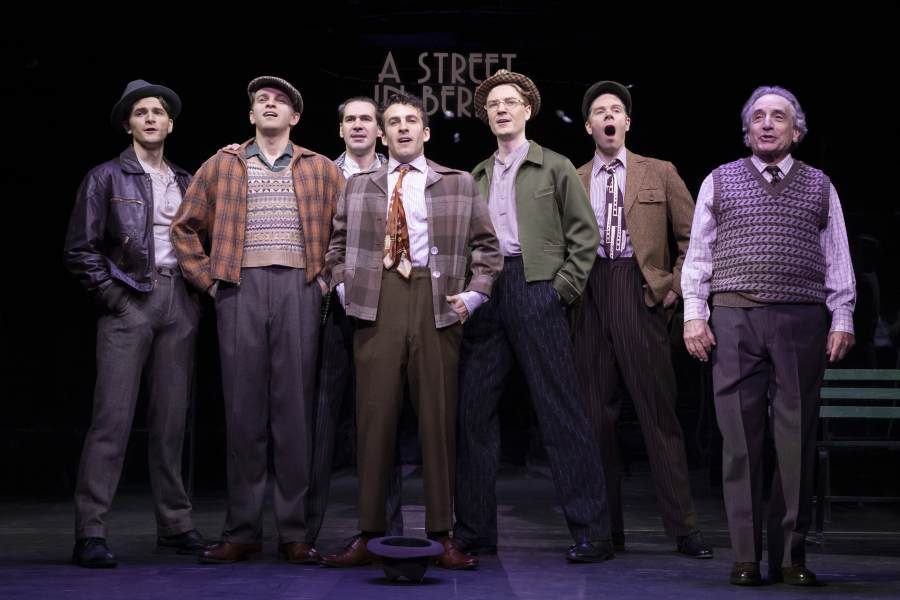 When TV’s Murphy Brown was mocking singer Barry Manilow, I was buying his albums and attending his concerts. I was unabashedly a Fanilow.

So I looked forward to “Harmony,” the musical that Manilow wrote with Barry Sussman, with whom he has written 200 songs. The show just debuted at the National Yiddish Theatre Folksbiene at the Jewish Heritage Museum.

Directed and choreographed by Warren Carlyle, the show has a cast of wonderful singers. The Comedian Harmonists consisted of six singers: 3 Gentiles and 3 Jews.They performed comedy, sang songs, made records, and gave concerts. In one of the first scenes, the Harmonists are prepared to perform but learn their tuxedos were stolen, forcing them to use waiter jackets and add comedy to their act. Hence the addition of Comedian to their name. In the late 20’s and 30’, the group was extremely popular and performed internationally. Today one can even find their music on YouTube.

The six are played by Sean Bell, Danny Kornfeld, Zal Owen, Eric Peters, Blake Roman and Steven Telsey. Kornfeld plays the Young Rabbi, so named because he was studying in Poland to become a rabbi before he joined the group. The Rabbi is also played by veteran Broadway performer Chip Zien, looking back as a now 87-year old survivor, recalling the career and decisions of the group. He particularly regrets one crucial mistake by returning to Germany when they could have remained in the US. Not believing that the Hitler would gain power nor that Jews would be led to their destruction, the group votes to return to Germany. A successful act, their privileged status allowed them to travel. At first, the religion of three of their members made little difference and, in fact, the six men were considered ambassadors of the Reich. But subtly they were satirical and critical of the regime while performing in other countries. Eventually the group lost its privileges since half of them were Jewish. The group could continue to perform but without its three Jewish members.

The audience shares the Rabbi’s vantage of hindsight and we know what the young men do not - that Hitler will rise to power and that their lives as entertainers and as Jews will change. He bemoans their decision and in a lovely but very long piece called “Threnody” agonizes over their wrong choice.

There are two featured women’s roles in the musical. Sierra Boggess plays the young Rabbi’s non-Jewish wife Mary. Jessie Davidson plays Ruth, a Jewish activist who marries the non-Jewish singer Chopin. The two women share a beautiful number “Where You Go.” When the two couples have a double wedding, it is interrupted by sounds of broken glass. (Kristalnacht) and inevitably the audience recalls the wedding scene and pogrom that ends Act I of “Fiddler on the Roof.”

Some of the music is lovely and reminiscent of popular Manilow ballads and love songs. In a couple of scenes the audience is shown how popular the Comedian Harmonists were. They accompanied Marlene Dietrich and performed with Josephine Baker. The performers are good, especially the experienced Zien whose pain and agony are touching.

The show is too long and some songs drag on. Each time I thought a scene was over, it continued. Some of the music is derivative and it’s almost impossible not to think of Les Miz or Fiddler during specific moments in the show. When the group performs, the dance number recalls the bottle scene from Fiddler. Even when the music was beautiful and touching, it outlived its welcome.

Musical theater can teach as well as entertain us. “Harmony” presents a piece of history that many of us may not know.So if you attend the show in the intimate theater that is selling out performances for its limited run, you will learn something about world and Jewish history. However, you need to be patient since the show unfolds over 2 hours and 30 minutes.

The show took 25 years to come to New York audiences. Maybe Manilow and Sussman should have waited longer to trim the musical and get it right.