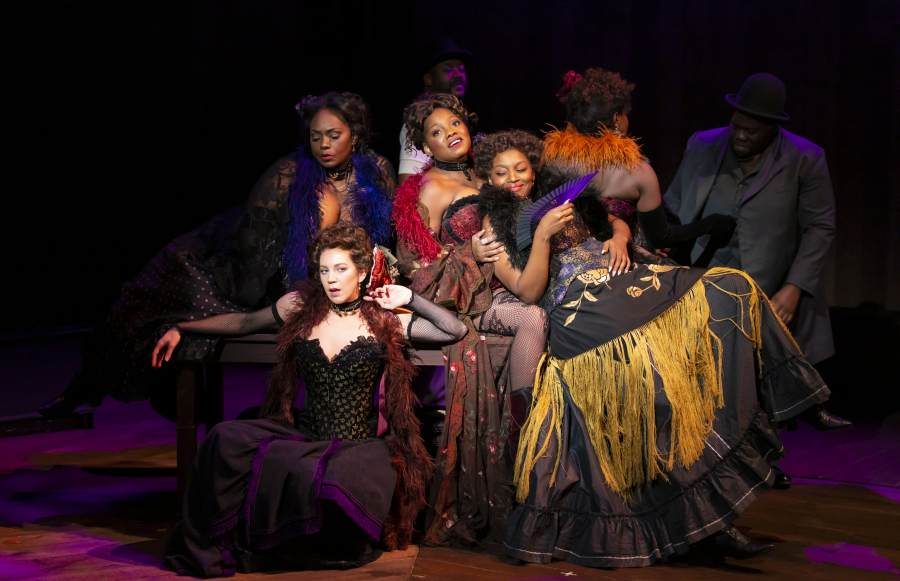 Lynn Nottage must be the hardest-working playwright in New York, having written three shows for the Fall 2022 season. First was Clyde, a terrific show about ex-convicts and second chances. Due to covid and despite great reviews, the play closed early. Nottage wrote the script for the new musical MJ,the show about Michael Jackson that recently opened. Nottage adapted her award-winning Intimate Apparel written in 2003, into opera form which is running at Lincoln Center Theater in the Mitzi E. Newhouse Theater.

The touching and inspirational story still works well.Based upon the experiences of her own grandmother, Nottage tells of Esther, a seamstress who travels to NY in hopes of one day opening a beauty parlor for black patrons. Lonely and solitary, Esther (beautifully portrayed by Kearstin Piper Brown) lives in a boarding house and has been saving money in her quilt. One day, she receives a letter from George, a man working on the Panama Canal, and they begin a correspondence. She cannot read or write so she gets help from her customers. Although they’ve never met, she fancies herself in love and George convinces her to marry him. Later he squanders away all her savings and begins a relationship with a prostitute, ironically one of Esther’s customers.

As a seamstress, Esther has a close friendship with Mr. Marks, an Orthodox Jewish purveyor of cloth (excellent Arnold Livingston Geis.) Although the two develop strong feelings for one another, their differences are too great for them to be together. Set in 1905, the relationship is near-impossible. Were it not based on a true story, I would have wished Nottage had given us hope that the two could somehow defy convention and be together. Despite her heartbreak and setbacks, Esther is unbroken and later returns to the boarding house to gather the pieces of her life to begin again. The last image the audience has is of pregnant Esther cradling her stomach.

As an opera with music by Ricky Ian Gordon, (The Garden of the Finzi-Continis.) the story is still moving. Although the intimacy of the theater enables us to have a closer connection to the characters, that same intimacy creates other issues. The music often is strident and piercing, especially with the high soprano voices. Perhaps in a large theater, one designed to absorb the sound, this would not have been an issue.

The libretto is flashed on three screens surrounding the stage. I found myself spending more time reading the words than watching the performers. In many cases that, too, became distracting but because of the atonal music, I needed to read the words. The cast is fine, and many of the performers have impressive operatic voices. As Esther, Brown is a wonderful singer and performer and the audience feels for her.

On the other hand, the male voices sung in lower ranges come across clearly. Justin Austin as George does a good job, subtly shifting accents from the first to the second act. At first, I almost thought George was being played by a different performer, the second with a Caribbean accent. Later the plot line explains the change.

As befits Esther’s occupation as a seamstress, the costumes ( designed by Catherine Zuber) are impressive. Esther’s wedding dress and the clothing she makes for Mrs. Van Buren are gorgeous.

The story is heartbreaking, especially when Esther realizes that her friend is seeing a married man and it’s HER married man. Nottage depicts the close bonding of the women but also includes the ever-present racism. George complains of the treatment and lack of opportunities when he looks for a job. When Mrs. Van Buren, one of Esther’s customers, claims to love Esther, she protests, noting that she was never even permitted to come through the front entrance.

A few moments of the music are impressive, especially when three of the performers recognize love that is right before them. But in general, the music is unremarkable and certainly not memorable. I’m not sure that the play works better in opera form, but I did appreciate the story.

I couldn’t leave the theater humming, but I was touched by Esther and her strength, getting ready to start again. Nottage has talent portraying strong women. Now let’s see what she does with Michael Jackson.

POTUS
The Minutes
Birthday Candles
Take Me Out