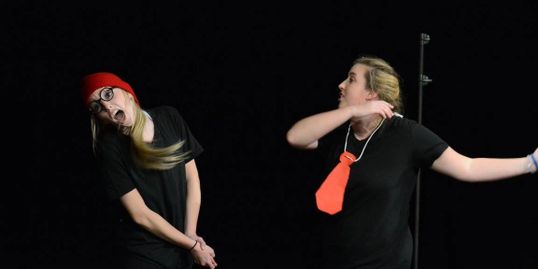 Knaves and novices, scholars and superfans… if you have any hint of an infatuation with the globally-revered William Shakespeare… please, skip the SparkNotes, and book yourself a ticket to see Liv and Mags!

They’re the stars and creators of 15 Villainous Fools, the critically-acclaimed send-up of the Bard’s classic Comedy of Errors, which recently concluded a smashing two-month run at the PIT Loft in New York City (154 W. 29th Street). The laugh-a-minute extravaganza, which has taken New York by storm in the last two years, turns the Bard’s madcap farce wholly on its head, injecting the Elizabethan text with contemporary colloquialisms — references cover Uber, Colbert, HBO Go, and Dear Evan Hansen, to name just a few — and a healthy dose of rap, puppetry, and (naturally) a bit of audience participation. The result is an hour-long rollicking and riotous romp that’ll have you rolling in your seat from beginning to end.

Now, the storyline itself contains a fair amount of farcical shtick to begin with, so you’d think just the play on its own would provide enough of a whimsical playground on which to play. And true, it might, as the Bard has indeed set a foundation…. but there’s no question the stakes are raised that much more once the show’s powerhouse players get their hands on the material. Comic masterminds Olivia Atwood and Maggie Seymour (or, Liv and Mags, as their billing denotes) make this show what it is, changing the game and raising the bar with original, guffaw-inducing performances that do not disappoint.

Fresh(ish) out of Bowdoin College, these two have hit the ground running with an outstanding New York debut. As Shakespeare himself would say, though they be but little, they are crazy fierce, and the production thrives on their unparalleled chemistry. Much like the central characters of their piece, this duo truly goes “hand in hand (not one before the other)” and you’ll delight in seeing that love and trust grow stronger as the play goes on and the buffoonery escalates.

To boot, they’re hysterical. With their quick wit, impeccable comic timing, and an impressive display of physical comedy chops, these two are the millennial answer to Tina and Amy, effortlessly shifting between 15 (yes, that title’s not for nothing) eclectic characters, swopping hats, adopting accents, and bounding across the stage like a modern-day Lucy and Ethel.

Particularly notable among the myriad of twisted personalities they portray is their treatment of aristocratic “sister wives” Luciana and Adriana, who flimsily futz with their hands while speaking in (intentionally) overly exaggerated accents (in short, think Cat Deeley meets Jane Leeves, then add scarves!!) Also praiseworthy are Atwood’s mousy Antipholus, who, when caught in a tailspin toward the end of the show, affects an adorably manic accent you’d think is straight out of a Saturday morning cartoon, and, among of a plethora of others, Seymour’s deadpan delivery of Egeon’s added, modern comic line. (Seriously, it’s so subtly simple…but she hits it out of the park!)

But the true genius of 15 Villainous Fools is that while on the surface it may seem like hijinks and silliness — and true, to some extent it is — there’s actually quite an important underlying level of poignancy in the way this piece is prepared and presented. Tasked with shaving the text down to hit the 60-minute mark (while saving room for the aforementioned comic routines and dance numbers), the two take a few artistic liberties in cutting characters, abridging lines, and contemporizing certain scenes.

But while several elements undergo the “modern overhaul,” the lines of the central servant characters, Dromio and Antipholus, maintain their original Elizabethan vernacular throughout. Amidst a cavalcade of others, these two characters are the heart — the core — of the show; likewise, as zany and wacky as this piece is, it’s still Shakespeare at its heart. Thus, their thoughtful decision to have these two central characters (the heart of Shakespeare’s show) retain their as-written dialogue (the heart of Liv and Mags’ show) speaks to the respect they have for this guy, and their ability to connect with his work on a deeper level. Their goal is to be silly and skewer the material, but they have an awareness and respect enough not to stray from its integrity. They recognize and honor what he’s trying to communicate. (After all, without Billy Shakes, there’d be no 15 Villainous Fools). And the fact that they are not only able to find that balance, period, but find it in this incredibly striking and beautiful way is ultimately where their true success lies. It makes it more than just a spoof… it’s a work of art.

Which is, again, not to say, they don’t find true success reveling in the funny (they end the show with a Shaggy rap for goodness sake!) and which is not to say it’s not an wildly enjoyable evening out at the theatre. Sure, there are times when it’s a bit fast-paced, and okay, let’s be honest, it does, more or less, require its audience to be well-versed, or at least familiar, with the play and its language, but overall, it’s a raucously fun production that hits all the right notes comedically and dramaturgically…and that’s not an easy feat.

The best part? Liv and Mags are having a blast, and wholeheartedly wearing their emotions on their face. They’re living their dream full-out and in watching them smile, soaking in every moment, you can’t help but reciprocate. It’s as infectiously addictive as, say, a bag of peanut butter M&Ms. So, grab yours, get online, and be on the lookout for where they pop up next. You’d best be sure you don’t miss it… we guarantee you’ll be #gladyoucame.