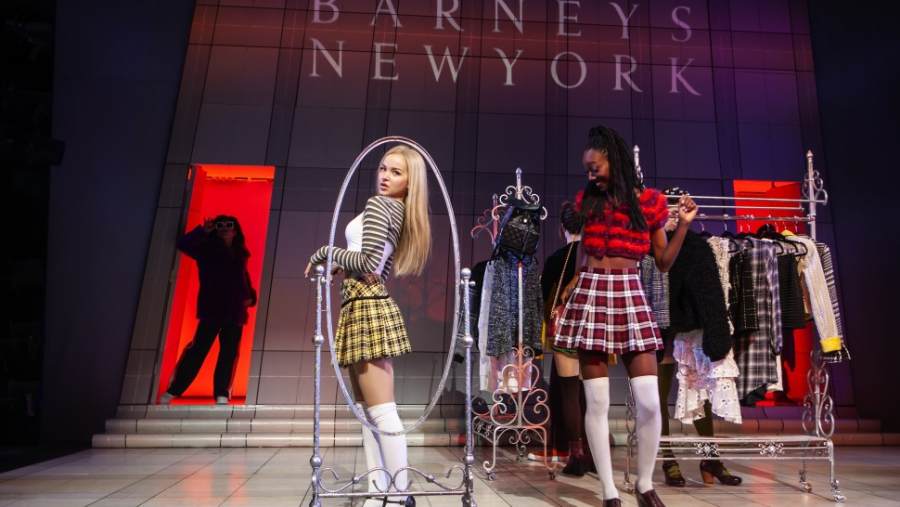 Some movies are better left on the screen. However, that doesn’t stop producers from trying to make shows out of them.  Based upon her 1995 movie “Clueless”, Amy Heckerling has created a stage version called “Clueless, The Musical” now running at The Pershing Square Signature Center.  The original script was adapted from Jane Austen’s 1815 novel Emma but set in 1980’s Beverly Hills. The movie developed a cult following and grossed well.

The show features the same ingenuous Cher, a spoiled though naive California girl who sees her mission as that of a matchmaker.  She successfully pairs up two of her lonely teachers and then she tries to make over Tai, a new girl in school. When Cher doesn’t get good grades on her report card, she negotiates for better ones. She is blissfully unaware of much that goes on around her.  Although attracted to Sean (Darius Jordan Lee,) she is the only one who doesn’t realize that he is gay.  Eventually she realizes that she cares for Josh, her father’s stepson, but then only when someone else expresses interest in him.

Cher is extremely wealthy and pampered, yet well-meaning and sweet. One of my favorite scenes from the show is when Cher completely messes up parallel parking on her driving test. She tries to assure the instructor that it doesn’t matter since she would always valet her car.

A lot of the dialogue in the musical is slang and music is from 1990’s popular songs. (Music by Alanis Morissette, Joan Osborne, Michael Bolton and the like). The words to the songs have been rewritten to fit the script but the melodies are recognizable. It’s fun to try to recall the originals and the artists.

Dove Cameron (“Liv and Maddie,” Descendants, Hairspray Live!) is talented and adorable as Cher. She’s wholesome, apple-cheeked and dewy but never really gets to really break out. The rest of the young cast is energetic, athletic and fun to watch.

Directed by Kristin Hanggi (“Rock of Ages,”) “Clueless, The Musical” is wholesome; in fact, the one character involved with drugs enters a 12 step program. There’s no foul language and the snobby characters are funny.  Even when Cher is robbed at gunpoint, the scene is light. She is more distressed at having dirtied her expensive coat than at having been threatened.

Like some other youth-centered shows, all the adults are played by only two actors-one male and one female.  Chris Hoch plays Cher’s father as well as the driving instructor and the history teacher.  Megan Sikora, a talented performer, is underutilized in the female adult roles.

The energy and dancing choreographed by Kelly Devine (Come from Away) make it easy to envision “Clueless, The Musical” on a larger stage, yet the stage design (Beowulf Boritt) is minimal. The costumes by Amy Clark are eye-catching; the high school girls wear ‘couture’ mini-skirts and matching accessories. Shopping and selecting clothing is a major activity in their lives.

Although “Clueless, The Musical" is fun and definitely has youth appeal, it doesn’t have much substance. Some of the longer running shows that attract younger audiences like “Wicked,” and “School of Rock” entertain but also seem to be instructive in a non-threatening way.  For theatergoers of the right age, “Clueless, The Musical” is pleasant theatrical entertainment.  In fact, the audience at Signature Center the day I attended was predominantly preteens and teens with their parents.  The 15-year-old boy next to me held a picture of star Cameron that he painted, and he practically squealed in delight when one of the performers gestured and smiled at him.

The show is silly, gentle fun and there’s nothing wrong with that.  It depends on what you are seeking in theater. “Clueless, The Musical” is keeping it real.