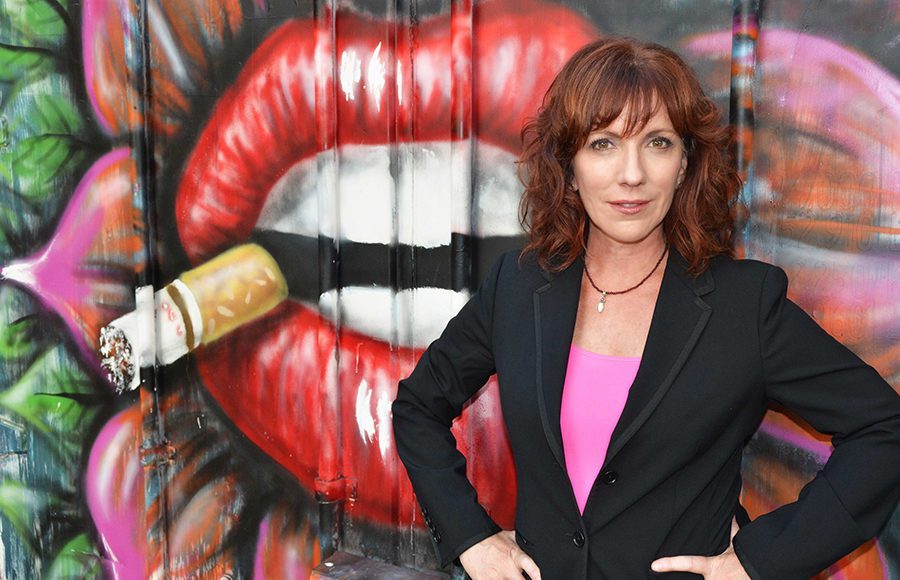 What’s an ethical person to do in the era of instant celebrity and a tweeting president?  How can a good Irish Catholic girl from New Jersey, daughter of the titular South Bronx garbageman and an Irish immigrant mother, compete with the Kardashians and their ilk? Radio host/stand-up comic Maureen Langan gives the audience an uproarious view on America, in Daughter of a Garbageman, now playing through April 28th at San Francisco’s mecca of solo performance, The Marsh. It’s a show that should not be missed, as Ms. Langan’s brilliant and often emotional 75-minute show offers a window onto her upbringing, while posing unsettling questions about the descent of our country into a state where media matters more than morals. Should sex tapes and plastic surgery be the new route to wealth? What about the traditional values she grew up with in her working-class family?

Langan finds a great deal of anger and frustration in her past. Her tough but loving father, an alcoholic prone to racist jokes, punched holes in the wall (“I covered them with my third-grade art,” she offers as a coping-mechanism for the young-Maureen) and, on occasion, chucked the family Christmas tree across the room. Langan, a career comedian, editor at Bloomberg News, and KGO Radio host, vividly restages her father, with his pronounced Bronx accent, as well as her mom’s Irish brogue. Her long-suffering mother counterbalanced her father’s rage with deep secrets; she withheld vital family details that took years to come out.

Langan commands the downstairs stage at The Marsh’s SF Valencia Street venue, her stand-up experience showing in her easy and impromptu interactions with the audience. Directed and co-created with long-time Marsh solo-show master David Ford, Daughter of a Garbageman leans on Langan’s humor and outrage to propel the show, punctuating it with bursts of music, Bruce Springsteen most notably. Langan’s use of gesture emphasis key moments, creating rhythms expressive of the penetrating power of emotions, be they anger, shame, or feelings of unworthiness. While comedy may be front and center, she always keeps the dark heart of the story upfront as well, letting the audience see the trauma caused by her dad’s anger, her mother’s taciturn moods and very orthodox morals (covering up was the m.o. as a teen), family tensions that manifested themselves in hospitalization for the protagonist as a teen. At one point in the show she marvels at how her mom kept it together through all the turmoil, asking her, “Mom, were you ever afraid?” Mom’s response? “I was too busy being angry to be scared.” And towards the end, Langan’s recreation of her mom, dad and siblings, their strong proletarian ethics, and their foibles, begins to take on a strange aspect as she frequently counterpoises it with the route that many celebrities take to the big-time now. Did she have it completely wrong all these years? Is she the problem? Her parents? America? She can’t figure it out completely, but her repeated use of the Kardashians as a favorite punching bag could be an indication of where Langan feels the guilt lies. They may not be English majors like her, but then again, they don’t have to be. They can just hire someone to write for them.

Performances of 'Daughter of a Garbageman' continue through April 28 at The Marsh.