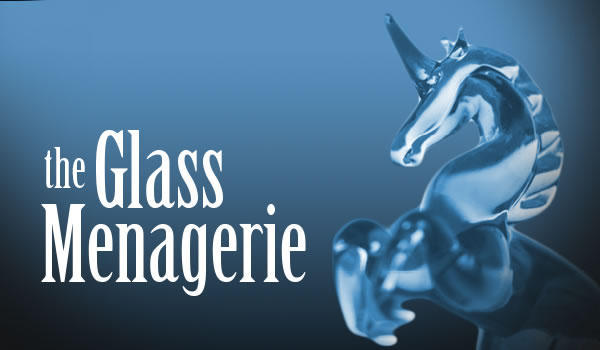 With a fine cast and a lovely little theater, this New Lamps production of The Glass Menagerie is an enjoyable way either to see the classic play for the first time, or to revisit it again.

This Tennessee Williams play first opened on Broadway in 1944, launching careers and changing American theater.  It revolves around a young man begrudgingly supporting the family his father has abandoned. It also features a painfully shy and slightly crippled sister character, whose preoccupation with a collection of glass animals draws her away from reality, and their mother, who mostly lives in the past, but is trying to look out for her daughter's future. Set against the backdrop of the Depression, the family struggles together with the past, the future, and one another.

Is the centerpiece of this production. Her acting is so strong and fascinating to watch, that you find yourself leaning in on every word she utters. She both makes great dramatic choices and has wonderful comedic timing.

Is a strong actor who brings a lot of charm to the character of Tom, who is (if you know the play) definitely supposed to be charming like his father.

Plays the part of Laura with a distanced sensitivity which becomes more engaged once the character of Jim comes into her life. Ms. Bernard sets up her character's arc perfectly.

I really liked the solid choices that Mr. Russell made for this role. He speaks loudly, as a man would who is taking elocution classes in his spare time, and comes across as a Prince Charming that any girl might swoon over.

In general, I enjoyed this production. I felt that Laura’s demise in the end could have been heightened, which would have made for an even stronger ending. Otherwise the cast and direction was delightful.

Firstly, the space is perfect for this play. It’s so much more than a blackbox. It’s filled with antiques and carpeting and furniture that make you feel that you are in the Wingfield home. Mix with great writing and wonderful actors and it’s a recipe for success.

In Manhattan at Episcopal Actors Guild