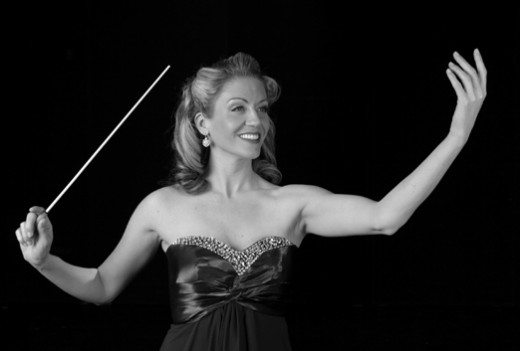 Melissa Ritz, who would have been described years ago as a leggy blonde, is a woman on a quest. In brief, she abandoned a long and profitable career as a cocktail server in Vegas for the New York theater scene, and New York is none the worse for it. Her solo show Journey of a Bombshell: The Ina Ray Hutton Story, performed at the United Solo Festival, is clearly a part of the quest; as writer, Ritz invests the play with evident empathy and admiration, and as performer with power, skill, and some awfully fetching vocals.

For the uninitiated (like myself) Ina Ray was a pioneering entertainer and bandleader in the '30s, 40s, and 50s, a former Ziegfeld girl eventually hosting her own TV show and all-girl band. That latter gender distinction seems to have haunted Hutton's career, and the motif of the show is her bitter frustration at perpetually being seen as a novelty act, rather than as heading a legitimate swing ensemble. The novelty unfairness is unfortunately overplayed, as there seems to be a great deal about Hutton that is potentially interesting and left unexplored. Then, enacting dialogue is a very tricky business in the one-person format; Ritz can act but not even Olivier tried to play scenes with himself as other characters, and for good reason. There are other ways to tell the story. Any one is better.

Ritz is a genuinely engaging performer with presence; there is the inescapable allure of Big Band music and nifty songs; and, if solid tapping doesn't excite you, we have nothing to say to one another. There is a whole lot of excellent in here, along with what should be a fascinating trajectory of an unsung artist's life.  All that's missing is a different approach, and one that lives up to the promise of the opening moments. Put another way, the Ritz who knows how effective it is to present a shimmying, conducting back to the audience as the lone light comes up knows a thing or two about what works, and this is the Ritz who needs to rewrite.

The United Solo Festival on Theatre Row continues through November 23.