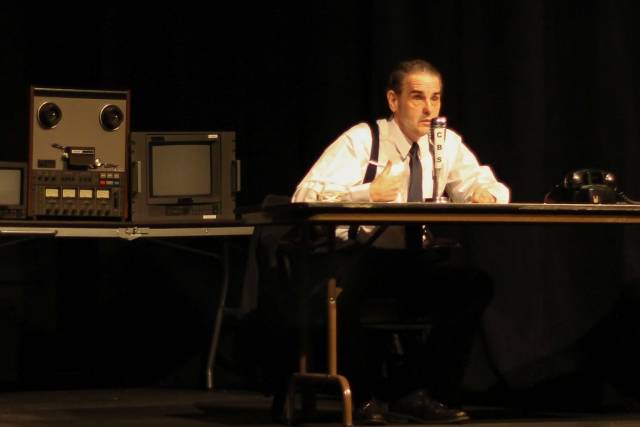 Pioneering American broadcast journalist Edward R. Murrow, who rose to prominence during the 1940s and dominated the airwaves in the 1950s, has become a storied figure in the decades since his 1965 death. With his brooding eyes, deep and authoritative voice, and assured composure, he resides in our collective memory and imagination as a panther in repose—his prowess leashed but at the ready. The Oscar-nominated depiction of Murrow by Michael Strathairn in director George Clooney’s 2005 film Good Night, and Good Luck has only added to Murrow’s mystique.

For his monodrama Murrow, playwright Joseph Vitale drew on what he learned while studying at the Columbia University School of Journalism, where he heard lectures delivered by Murrow’s longtime producer, Fred Friendly. In addition, Murrow’s widow, Janet, vetted the play’s content, along with David Schoenbrun, a Murrow colleague during the World War II years. Vitale succeeds in giving a fairly in-depth overview of the Murrow life and career. Whether he succeeds in drawing any overarching conclusion about the larger significance of Murrow’s career is debatable.

Vitale’s Act 1 is devoted in large part to the newsman’s overseas radio reportage during the war, and on the respect he gained for the British people and their ability to remain civil in the face of immense fear and chaos. Act 2 is centered on Murrow’s TV takedown of Senator Joseph McCarthy during the senator’s campaign to expose Communists during the 1950s. The play’s latter half also touches on Murrow’s skepticism about television’s ability to effectively serve the public, as it is so beholden to corporate interests—a theme that resonates with 2016 audiences. Vitale isn’t quite able to unite the play’s two halves under a single thematic umbrella. But any biography-based drama is going to be somewhat episodic in nature. Perhaps it’s to Vitale’s credit that he doesn’t try to jam the material to fit a single thesis about the man, his era, or his profession.

As Murrow Joseph J. Menino has located the pitch and cadences of Murrow’s speaking voice, especially in scenes depicting the journalist’s milestone moments on air. At certain moments, when Menino is seated in a chair (rather than behind the news desk), he resembles Murrow quite a bit. And when he picks up a cigarette, the resemblance sharpens. Menino should probably smoke (or mime smoking) more frequently, as Murrow seldom spent five minutes not brandishing a Camel. Also, it’s understandable that for a one-man show, director Jeremy Williams would want to have Menino move about the stage and gesture broadly at times. But too much movement can create a frantic effect, diluting the serenity and strength we associate with Murrow. Finally, when he addresses the audience, Menino seems unsure whether to direct his eyes toward various individual listeners in succession or, instead, to stare above their heads into the distance.

The play uses extensive audio recordings and projected video clips. Sometimes it seems that Williams, sound designer Liz Stanton, and video designer Pierre Depaz have gone overboard with such effects—they tend to draw attention to themselves instead of enhancing the live action. On the other hand, the video loop used during a scene depicting Murrow giving listeners his report on the liberation of the concentration camp at Buchenwald works effectively. The sequence—in which a camera repeatedly pans the rows of drained, pale faces—is haunting indeed.