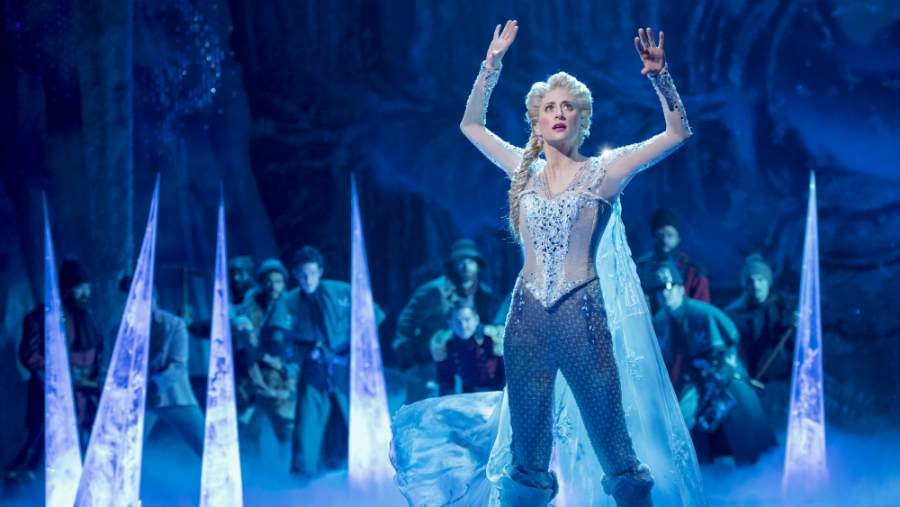 If you were a fan of the blockbuster movie Frozen, or better yet, saw it with a little person as I did, you were excited when Disney announced their plan to produce a Broadway version. In our house we’ve been anticipating this for two years. Finally the time has come! With a lot of fanfare and press, the show has opened at the St. James Theatre. Directed by Michael Grandage, the musical  includes several new songs by Kristen Anderson-Lopez and Robert Lopez.  Despite the extra music and dance numbers (choreography by Rob Ashfod), movie purists will be relieved to see that show is pretty much true to the film.

The musical is well-cast. Characters like Anna (young Anna played by Mattea Conforti and then later by Patti Murin) are sweet and funny and the audience absolutely adores them. The true heroine of the show, Murin is pretty, self-effacing and so doggone likable, she really captures the teenage spirit of Anna. Cassie Levy plays Elsa, sad, aloof and distant.  Act I ends with a glittering “Let It Go” number, the song that everyone eagerly anticipates. The best part, besides Levy’s high notes - enough to rival those of Idina Menzel - is when her blue coronation dress changes right before our eyes! Keep your eyes on her costume. If you saw the show Cinderella, you’ll recognize some of the same theater magic. Many of the special effects are done through creative lighting (by Natasha Katz), as when Elsa waves her hand turning everything into ice.

John Riddle as Hans has leading-man looks with a voice to match, though paradoxically he’s the story’s villain. Olaf, portrayed by Greg Hildreth manipulating a 3/4 puppet, is an audience favorite. Hildreth sounds very much like the irrepressible Josh Gad and his number “In Summer” is very entertaining with a setting like a 3D greeting card.

Fans of the movie will anticipate Frozen’s cute trolls, Kristoff’s adoptive family. Yet at first they seem a bit frightening, and initially youngsters may find the trolls too dark. The heads of the family, Cabbie and Bulda, appear early in the show, helping the King and Queen when Elsa inadvertently hurts her little sister Anna.  The scene when Anna meets the entire clan is easily one of the cutest in the movie, yet the scene in the show lacks the charm. However, the songs (“Fixer Upper”/“Kristoff Lullaby”) allow Jelani Alladin, as Kristoff, to demonstrate his singing and dancing talents.

Although the show is very much like the movie, it falls flat. Boring almost. Where’s the special Disney theater magic? There are few gasps and awes of astonishment.  Yet no one at Disney needs to worry.  The tickets are selling out and at high prices, and the souvenir concessions are doing a brisk business  ($30 a doll for Anna and Elsa, while plush Sven and Olaf go for $45).

The evening shows are all starting at 8pm — kind of late for many youngsters, the young moviegoers who made the Frozen a hit.  As for us older, more calloused theatergoers, we expect more from Disney. Next week when my youngest critic goes to the show, I’ll get her review. My guess is she’ll love it. It’s true enough to the movie and that’s what she expects.

In Manhattan at St. James Theatre

At BroadwayCon 2018, we got a first listen to Disney’s newest Broadway musical: Frozen. Songwriting husband and wife team Robert Lopez and Kristen Anderson-Lopez (who worked on both the film and Broadway show) joined actor Greg Hildreth, who plays the lovable snowman Olaf in the Broadway musical, to talk about their songwriting process and expanding Frozen from an animated film to a full-length Broadway show. They also previewed a few of the show’s new songs. Here are five things we learned: “Let It Go” was the first song written for Frozen. Robert and Kristen explained that they wrote Elsa’s big number “Let It Go” first, then used it as a springboard for all the other songs in the film. For example, “Let It Go” includes the line “Don’t let them in, don’t let them see,” which they then used for Elsa’s part in “For the First Time in Forever.” Even the song “Do You Want To Build A Snowman?” incorporates a musical motif from “Let It Go” that Robert and Kristen call the “Elsa’s pain” theme. Robert and Kristen also talked about the process of composing “Let It Go.” Robert explained that they conceived of Elsa as “the buttoned-up one, the straight-A student with a secret to hide.” They r …Read more