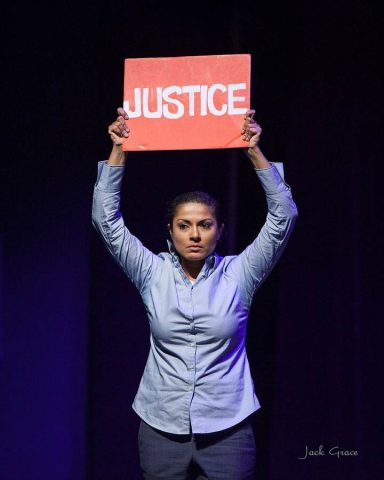 Qurrat Ann Kadwani's one-woman play Intrusion, is a glimpse into a future where rape has been eradicated...or so we believed. Those who want their theater to invite them into a thought experiment will find plenty to sink their teeth into.

Written and performed by Qurrat Ann Kadwani, Intrusion explores a society wherein no rape has occurred for the past twenty years...until it does. Kadwani shifts between eight variegated characters, each of whom cracks open a new piece of the truth through statistics, storytelling, academia, and journalism.

Kadwani pops between characters with the aid of simple props and costume changes. However, if she were to shed all of the accoutrements, she could still convey the essence of each of her eight characters clearly; her commitment to the material and crafting her onstage personas were palpable in every scene.

It is a feat to tackle material as heavy as sexual violence, yet Hester has done so with deliberate thought, though a slightly illegible vision.

Captivated by the performance, I nonetheless found myself willing Kadwani to push each of her scenes just a little bit more. As the Prosecutor lamented being given the only documented rape case in twenty years, and hoped aloud for a life sentence without parole for the perpetrator, I yearned for a more nuanced critique of our criminal justice system. The School Kid's quick mentions of nonbinary and genderfluid identities were, quite literally, an afterthought ("Male and female..." [a long pause, implying a teacher's reprimand] "And nonbinary."), though the bad taste left in my mouth may well have been due to the audience's tasteless laughter at the existence of non-cisgender identities. Further, though lighting design was used to great effect, abstract projections between scenes added little to the impact of the piece.

One thing is clear--Kadwani is an electrifying performer, throwing herself bodily into each character she plays in Intrusion. I saw myself in her Narrator, calling on the audience to spend some time with the uncomfortable reality of sexual violence. Of particular note, though, was her performance of the Politician. The Politician baits a hook for the audience, speaking of the most constituent-friendly way to revive rape crisis programs in response to the new wave of violence coming to light, a refreshing mixture of idealism and pragmatism. "Perhaps," the viewer thinks, "men like this one in government will change things." Yet in an instant, the Politician morphs, oozes sleaze as he sexually harasses a female companion.

Intrusion is not a faultless show, but it is clear it is a necessary one. For an evening of contemplation about each of our complicity with sexual violence and rape culture, this is the one to see.