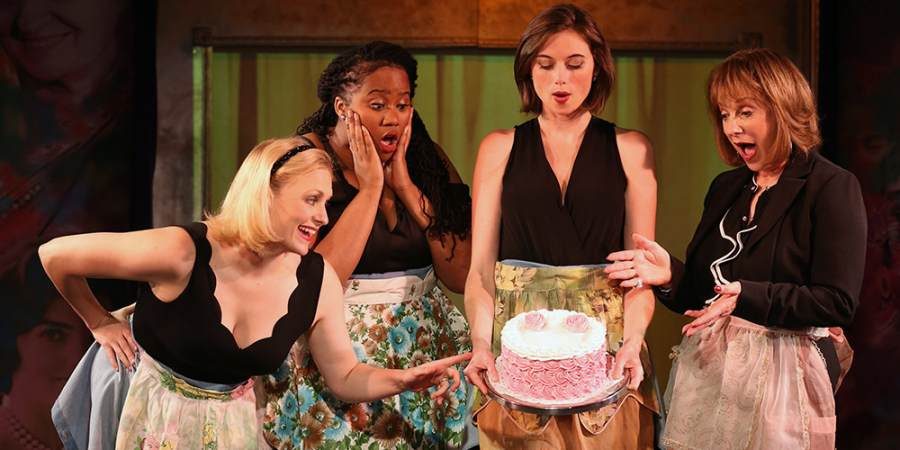 What songs make up the soundtrack of your life?  Do the hit songs of the last century reflect the moods of the times and attitude towards women? That was the question writer Dorothy Marcic sought to answer in her book Respect, the basis for the new Off-Broadway show This One’s For The Girls. Marcic examined the Top 40 songs sung by women, determining that the music showed the change of women’s attitudes from co-dependency to independent.

The show features an ensemble of four women performers. Jana Robbins plays Janet, a writer-researcher who narrates the history of women from the time of the suffragettes to present-day as she tells the story of the women in her life. Among them are women who have been abused by husbands, women who were independent, and others who were housewives.

Many of the songs are presented as snippets or as musical mash-ups.  A few songs become stories, giving each of the other three female performers opportunities to showcase their skills.

Haley Swindal is adorable singing Vikki Carr’s hit “It Must Be Him.” She plays a young woman agonizing over the phone call that doesn’t come. She also is a Betty Boop character when she sings, “I Want To Be Loved By You.” Traci Bair is flirtatious and coquettish as she sings “Diamonds Are A Girl’s Best Friend.” The show tells of sexy girls like Marilyn Monroe who morphed into Anna Nicolle Smith into the Kardashians. Anessa Folds brings down the house with her version of Billie Holiday songs and she later plays Rosa Parks.

Besides the wonderfully familiar music (many songs tracked the story of my own life), the show makes effective use of photos flashed on a screen over the stage. As the ladies sang, we found ourselves identifying the famous people.  When the performers sang  Joanie Sommers’ “Johnny Get Angry,” there were pictures of Johnny Carson, Johnny Cash and Johnny Mathis along with others. During “Sweet-Talking Guy” photos flashed of Bill Cosby, OJ Simpson, Bill Clinton as well as Hugh Hefner. And of course, there were pictures of iconic women as well.

The show moves quickly and is quite entertaining. My colleague noted that it was slower in the beginning when she didn’t recognize some of the music, but it picked up when music became familiar. For many, the earlier music of the suffragette times and WWII didn’t resonate but the history did. Women who worked in factories lost their jobs when the men returned. There’s little costuming in the musical but there was one cute bit when the Rosie the Riveter denim jackets converted into aprons.

As the senior member of the cast, Robbins doesn’t sing as much as the others and her vibrato is too pronounced. The play opens with “Janet” explaining about the man who left her two years earlier and how she has been trying to pick up the pieces. When he finally calls, she blows him off. Obviously her part registered with some of the audience who cheered for her.

The musical covers all the familiar songs and knows how to hit all the right buttons, including a segment on Rosa Parks. However, I honestly felt the show didn’t need part of Martin Luther King Jr’s speech in a segment that was about Parks.

What would a woman’s show be without anthems like “I Am Woman” and “Respect?”  We all expected to hear them and weren’t disappointed. This One’s For The Girls is a show written about women for women. It makes for a great girls’ night out.

This One’s For The Girls