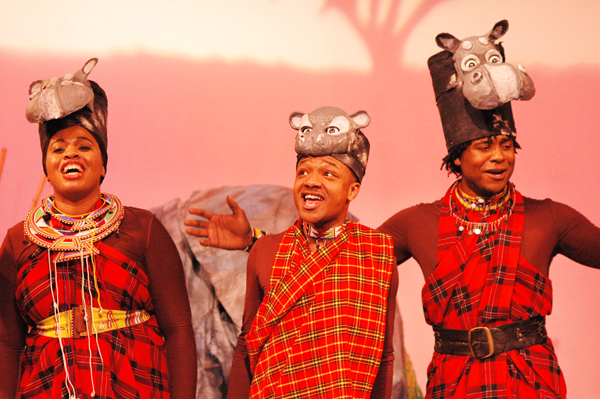 A charming one-hour children’s show, Owen and Mzee The Musical teaches children that creatures can get along despite their differences.

Based upon a true story, the musical by Michelle Elliott (book and lyrics) and Danny Larsen (music and lyrics) tells the story of Owen (Eric J Willingham), a baby hippo separated from his parents after a tsunami. When the frightened youngster is captured and brought to an animal sanctuary, he is placed in an enclosure with Mzee (TJ Bolden), a 130-year-old surly, solitary tortoise.

Mzee is gruff and makes it clear to the hippo that he’s an interloper.  However, the tortoise softens quickly when Owen helps him to repair his shell and later when Owen sings a whimsical song about how the tortoise actually resembles his mother from the back. Eventually Owen realizes that he can’t escape over, under or through the wall to find his parents.  So he becomes reconciled to the idea that he will start a new life for himself.

What’s really charming are little touches that adults will appreciate. When the two creatures sleep, Mzee in a chair and Owen on the ground, the young hippo keeps crawling over until he’s practically touching the tortoise. As the other animals at the sanctuary observe their interactions, they make some humorous comments about one another.

Owen and Mzee could be somewhat scary and sad for young children since the child gets separated for his parents and will never see them again. They’ve probably died but the unpleasant aspects are handled quickly and tastefully. All Owen knows is that he and his parents were separated by the big wave. Owen has little time for fear or even loneliness as he begins his new life.

Presented by The Vital Theatre and directed by Stanley Wayne Mathis at the Theater at Blessed Sacrament in Manhattan, the show has little scenery, but the costumes are colorful and the show moves quickly with a lot of music and not too much dialogue. The actor playing Mzee wears face paint and a cap and a shield-like shell on his back.  Owen has a cap with ears.  The faces of the performers aren’t covered but the animals they portray are suggested, sometimes with puppets or cut-outs, similar to the approach used in The Lion King.

Children should be introduced to theater at an early age to make them fans.  Take them early and often.  If they learn valuable lessons along the way, even better; theater can teach without sounding preachy.  The best critique of all came from the four-year-old who, after watching the show, declared she liked it because “they got along.”

In Manhattan at Theater at Blessed Sacrament

Review of the Public Theater’s ‘Twelfth Night’...
Review of ‘My Fair Lady’
Review of ‘Pretty Woman’
Review of ‘Hershey Felder as Irving Berlin’