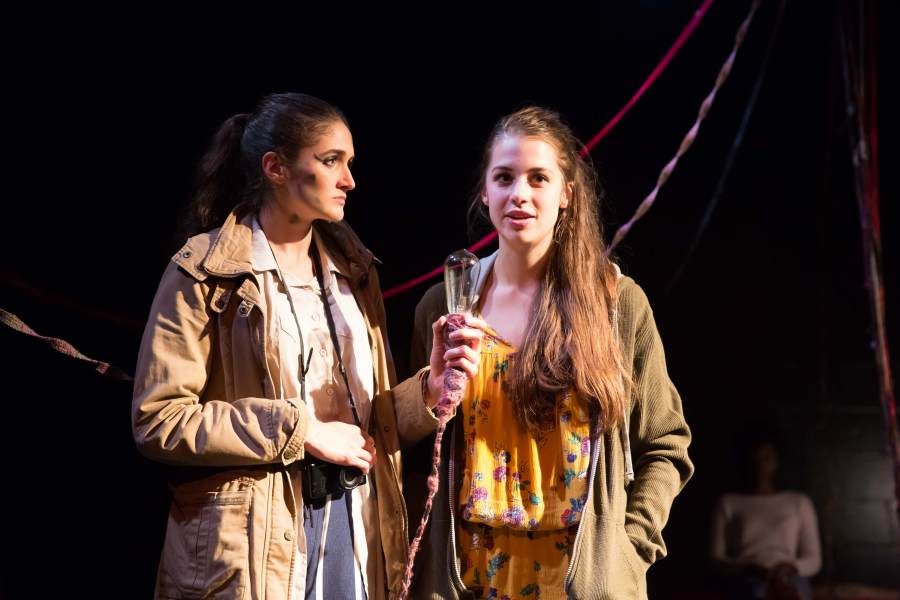 The Arctic Group's Pomegrenade, written and directed by Ran Xia and performed at IRT, a cozy little space a stone's throw from the Hudson River, is a Chuck Mee-style reimagining of the Greek myth of Persephone, where the consequences of the goddess's abduction is the war and refugee crisis plaguing our world today. The story is an impassioned call for humanity in a world of war, and though at times the play is long-winded, that passion is evident thanks to the production's cast and some thoughtful staging concepts.

In Pomegrenade, Hades has abducted Persephone because she is the key to his archive project. The overabundance of death on earth has led to an overcrowded underworld, and Hades is determined to archive every memory. Interspersed with the myth's retelling are stories of women fleeing and fighting back against adversaries in this global struggle. The text has a sound synchronicity between the Greek story and its contemporary component: the refugee crisis seems like a logical if tragic repercussion to the acts of the gods, divorced from but nonetheless intimate with the events of the human world, and the stories blend together well. The play's monologues, though, drift and sway too liberally. While they are performed with heart, they are very difficult to keep up with. Nonetheless, I enjoyed watching the ensemble perform and the thrust they brought to their monologues.

Ran Xia has constructed some final stage ideas as well. À la Sarah Ruhl’s Eurydice, this underworld has a yarn construction as well. Hades, solemnly performed by Finn Kilgore, collects the yarn around his fingers as the refugees, performed movingly by an ensemble of four women, and Hermes (Marcielis Galanes), report their stories. Making the stories tangible, as yarn, suggests blood being removed from the tellers, stringy souls being moved from one body to another's fingers.

An intriguing imagined character, 4:48, possibly a Sarah Kane reference as she is a woman who has taken her own life, has been called upon, along with Hades, to remember and hold the endless refugee stories. I can sense the creative moment when the character was conceived, but desire greater shape, more concern with how that character works on the boards. It is a sign of a young passionate theater mind, and that's lovely itself.