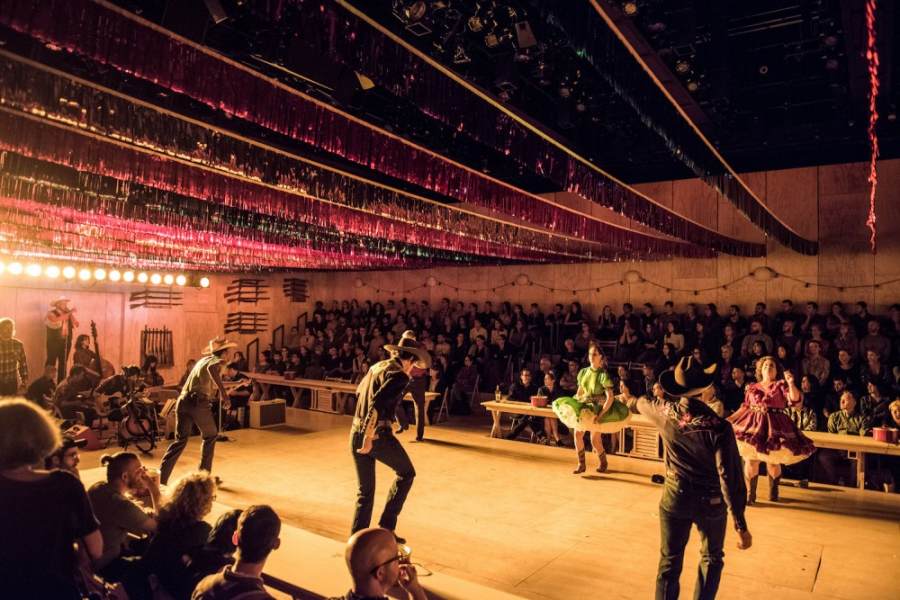 Who would have ever thought the words ‘dark’ and ‘sexual’ would ever apply to the 1943 classic musical Oklahoma?  Without considerable changes to the script or the music, director Daniel Fish has totally reimagined the musical, infusing a whole new vision into the landmark show.

For some, his pared-down version, which recently moved from St. Ann’s Warehouse after a sold-out run, will be exhilarating; for those who love the original, the show will be disappointing and slow.

The songs are all there but presented without lush orchestrations. Instead, the seven - piece band at the Circle in The Square creates a country western sound, complete with banjo.  The hero, Curley, played tremulously by Damon Daunno, often picks up his guitar and accompanies himself. In fact, during a love song he sings to Laurie ((a fine Rebecca Naomi Jones,) he reaches for his guitar only to have her tell him not to play (but he does anyway.)

Daunno is slender and young- looking. Despite his cocky words, he is unsure and uncertain.  After asking Laurie to marry him, he confesses that he just doesn’t know what he’ll do if she turns him down. Suddenly the original dialogue seems appropriate, and Curley sounds like a high school junior who asked a girl to the prom and fears rejection; he ’s hardly the tough brawny cowboy ready to tackle anyone and anything in the frontier

Laurie has changed in Fish’s version, as well. Despite her misgivings about farmhand Jud Fry (a pallid Patrick Vaill) she lets him take her to the party to spite Curley. In fact, despite her confusion, she dances with him and seems to flirt and smile but then becomes frightened.  She’s a young woman, bewildered by her sexual feelings. Laurie’s famous ballet scene takes on new meaning here.  Performed by Lead Dancer (Gabrielle Hamilton with a shaved head and wearing a white ‘spangled T-shirt that reads  “Dream Baby Dream,”)  her movements suggest Laurie’s sexual awakenings.

The second leads, Ado Annie (a lusty Ali Stroker who rides her wheelchair like a bucking bronco) and Will Parker (James David) are more overt about their desires, providing a source for humor.  Ado Annie is a modern girl and finds nothing wrong in kissing anyone who talks ‘purty “ to her. Will is a more straight-laced version of Jud; he’s attracted to the girls in the burlesque he saw in Kansas City.  Yet he explains that he’s a one-woman man. Mary Testa plays Aunt Eller, the wise aunt who adds wisdom and observations. Testa’s sarcastic delivery lends humor to the musical.

The famous Rodgers and Hammerstein songs are all present in the musical, but often sung slowly. When Daunno sings, he scoops the notes and his songs take on a different nuance and often a Western twang .  When Ado Annie sings, her songs sound suggestive, with a slight leer and glance.


In the original version, Jud Fry, the misfit, lonely farmhand, arouses no alarm. The others laugh at him but put up with him since he’s a good farmhand. Jud has naked pictures of women in his room and watches Laurie obsessiveness and possessively.  Today we might label him a sexual predator. When Curly sings “Pore Jud is Daid,” the song is ominous.  The theater is well-lit until Curley enters Jud’s room, and suddenly the entire theater goes dark.  Finally, the song concludes with a video camera focusing on the bewildered expressions on Jud’s face.


This modern interpretation of the show has a surprising and disturbing ending.  When Curley kills Jud in self-defense, Aunt Eller hastens his trial despite the protestations of one of the other men. Instead of ending with a rousing patriotic version “Oklahoma”, the reprise is more serious and somber, and the last image we see is Curley and Laurie wearing blood- splattered clothing. Not the happy ending we usually expect.

Daniel Fish is baring the real emotions of his characters which is probably closer to the reality of people in the frontier. His characters are young settlers, famers and cowboys who are trying to make lives for themselves while dealing with their emotions and physicals needs.  Astonishingly, Fish achieves this by changing very little of the original musical.

“Oklahoma” was a hopeful show, a musical that signified prosperity and unity. (“The farmers and the cowboys should be friends.”) Yet “Rodgers and Hammerstein’s Oklahoma" is bleaker and far more suggestive than the 1943 version. If you expect the old show, you will be disconcerted and taken aback.  It’s a masterful reimagining of the musical, but it’s not your father’s “Oklahoma.”

Review: The Rose Tattoo with Marisa Tomei
Review – Gary : A Sequel To Titus Andronicu...
Review: Merrily We Roll Along
Review: “Clueless, The Musical”