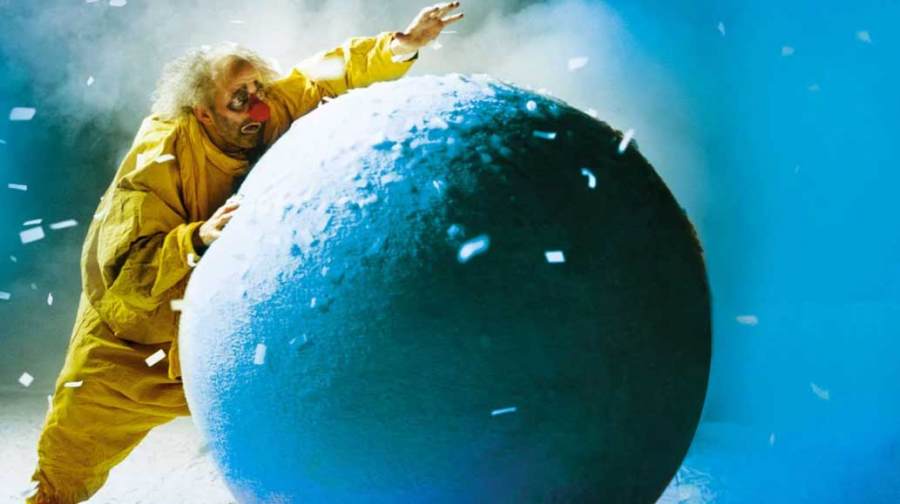 It’s easy to understand why some people suffer from Coulrophobia (fear of clowns) especially when their clown faces are hidden under greasepaint, false noses and perpetually dour expressions.These clowns rarely speak, using mime and exaggerated gestures to convey emotion. Yet Slava’s Snowshow, a 100 minute show at the Stephen Sondheim Theatre, is a production for all. As producer Hunter Arnold notes, it’s a show about “finding your inner childhood innocence.”

There were adults at our matinee performance, surrounded by lots of children of all ages. Although I figured some kids might be noisy, there wasn't a disruptive sound, outside of laughter. There were some surprisingly depressing moments in the show, some of which might be hard to explain to youngsters. In a strange way to start a show for kids, Slava (Russian performer Slava Polunun) moved across the stage painfully slowly, looking very forlorn. With a bulbous red nose, flyaway white hair and a shapeless yellow bag of a costume, I momentarily thought of a dejected Santa Claus. This clown was obviously unhappy because he wore a noose around his neck attached to a rope offstage which he pulled, only to drag out another clown with a noose around his neck as well. In another skit, another clown entered having been shot with several arrows. He cavorted around the stage for a bit, only to fall, motionless on the stage. When our ‘lil’ critic asked what happened to him, we avoided the subject. There’s darkness in Slava’s Snowshow , but the clowns are skillfully able to transcend the heaviness.

Each clown had his own style, and some were able to connect to us with mere glances or gestures. The skits were varied and uneven. Most told no story at all and might have been somewhat confusing. Quite frankly, the best moments of the show were when the clowns interacted with the audience, using bubble machines spraying water, tossing confetti around or even just getting people involved with clapping and noisemaking. During the interval, several of the clowns moved through the audience, posing for pictures, walking on the chairs and mingling with the crowd. One handed ‘lil critic’ a bag of confetti which made her day. Behind us, the clown took a woman’s pocket book and tried to trade his tattered umbrella for it while her grandchildren yelled for him to return it.

Then came the climax and we’d been forewarned. There was a snowstorm brewing (Heck-look at the title.) We expected bursts of wind and snow, and so we wore hooded sweatshirts for protection. But when it began, it was shocking, with gusts of “snow” shot at the audience. We put up our hoods and closed our eyes because it was impossible to stare the source of the snow. Instead we laughed and laughed hysterically. When the storm had ended, hair and clothes were covered with ‘snow.’ But the fun continues because suddenly huge ‘snowballs’ (inflated beach balls) began to float around the theater. Young and old alike stood to hit them and watch them drift away. The balls continued to circulate through the Sondheim Theater, going on for quite sometime while the clowns onstage watched us.

As we left to catch our train, the balls were still sailing through the theater and we continued to laugh. When we got home and took off our jackets and sweatshirts, we noticed that we had left a trail of ‘snow’ behind us. We were still smiling and talking about it the next day.

It’s best to be in the orchestra to really be part of the action, unless you want to watch from above. Who is Slava’s Snowshow aimed at? Who had a better time-the kids or the adults? Hard to tell because we are all children at heart.