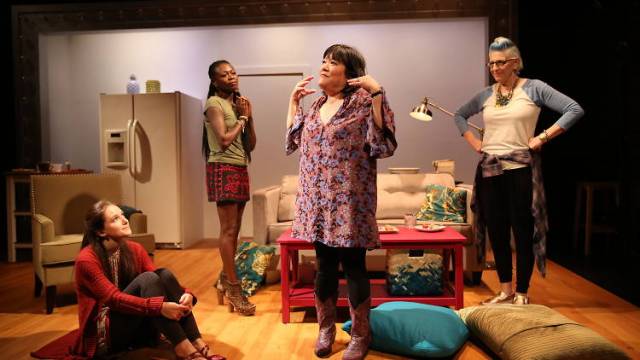 In a society focused on thinness as one of the defining qualities of beauty, women often have complicated and thorny relationships with food. The different ways that frustration can be expressed is the focus of comedian Lisa Lampanelli’s new play Stuffed, currently playing at the WP Theater.

Lampanelli’s play places four women together in a living room, where they each share their experience dealing with their weight and associated body image issues. Lisa (Lampanelli) begins the conversation by discussing her own history of struggling with being overweight. She describes her relationship with Frank, an overweight man whom she loved deeply but eventually felt forced to leave because of his unwillingness to deal with his diabetes diagnosis. Katey (Zainab Jah) gets no sympathy when she first describes her inability to gain weight, as the other women hear only the answer to their constant struggle (who doesn’t fantasize about being able to eat whatever you want without gaining a pound?), but her monologue overturns that stereotype by delving into the tensions it caused in her relationship with her mother. Britney (Jessica Luck) addresses her issues with an eating disorder, talking about her deep obsession with the food that she does (and doesn’t) eat. Ending the evening, Stacey (Ann Harada) pridefully recounts her path to confidence and self-love despite the cruel comments she faced as a child because of her weight.

Under Jackson Gay’s direction, several of the performances are nuanced and moving. Lampanelli’s characterization of an eating disorder at times relies on stereotype, but in Britney’s monologue, she creates a more complex understanding of this character’s case as an individual circumstance, and Luck’s performance turns it into a heart-wrenching story. Likewise, Jah’s performance as the chronically thin Katey creates sympathy for a character type typically portrayed as the “skinny bitch,” a term she tackles with a vengeance.

The play itself feels more like stand-up comedy than a concrete narrative, expressing its themes overtly through jokes and direct conversation, with racy humor that mirrors Lampanelli’s usual comedic style. Each character is given a monologue, creating four moments that help ground those thematic concerns in solid and moving characterization by putting a face and mini-narrative to the issues Lampanelli comments on. Though the characters are all common tropes seen often within the conversation about women and food (e.g., “the confident fat gal,” “the skinny bitch”), these monologues have instances of depth that help create more individualized personas for each character. This helps the show address a much-discussed topic with a more focused lens, using these women’s individual stories to weave a broader view of how food and body-image issues affect women across society.