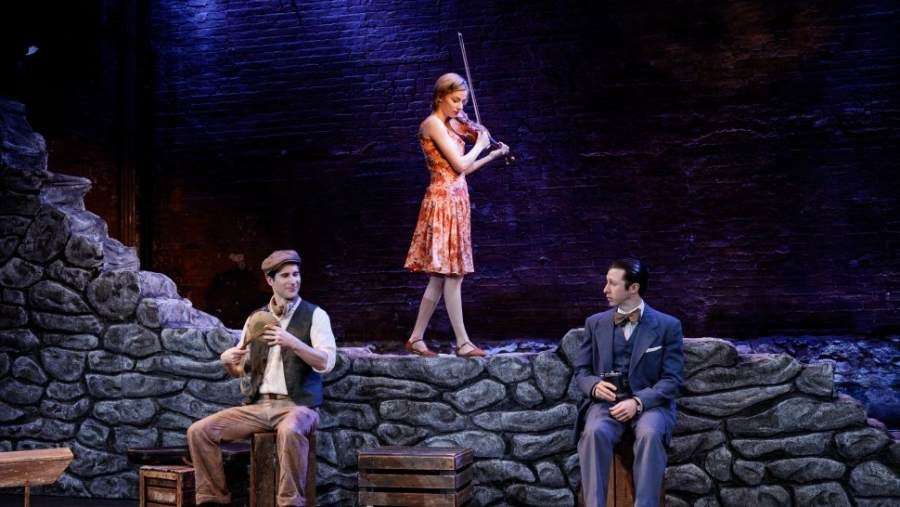 The title of the new play by James Inverne at The Cherry Lane Theatre is misleading.  A Walk With Mr. Heifetz sounds like a play focused upon the famous Russian-born Jewish violinist.  Yet it is really about Yehuda Sharett, an Israeli composer-musician and brother of Moshe, the second Prime Minister of Israel.

Act I is set in 1926 in pre-Israel Palestine. After giving a concert, Heifetz (Adam Green) agrees to walk with Yehuda (Yuval Boim), a passionate, excitable Kibbutznik who composes music and leads a choir.  Heifetz is unsure as to why the other man wishes to speak with him and the two discuss music and the responsibilities of talent. Yehuda is somewhat accusatory, claiming that Heifetz is reaping the benefits of his talents rather than worrying about others.  Heifetz becomes defensive but by the end of the act, convinces Yehuda to go to Berlin to study music.

Act II takes place in 1945. Victims of the Holocaust are trying to come to Israel, the British are about the leave the land and war between Israel and its Arab neighbors seems inevitable.  Yehuda’s brother Moshe (an earnest Erik Lochtefeld) comes to visit him.  Having studied in Germany and returned to Israel, Yehuda has suffered some personal tragedies in his life which cause him to remain almost hermit-like in his small dark apartment.  He is morose and unable to function. Moshe implores him to leave the darkness, stressing the importance that his music had on victims of the concentration camps and noting that his songs will inspire the people in their new state of Israel.

In his debut as a playwright, Inverne is able to convey his deeply-felt emotion about Israel but his characters are too simply drawn and he touches on too many themes.  Despite a good performance by Yuval Boim as Yehuda, the character is distracting and seems unable to focus; he notes that people call him “frenetic.” Heifetz is depicted as a straight-laced, mirthless character, and we never hear him play. (Although a young violinist Mariella Haubs plays a song at the beginning, she is merely backdrop, plucking strings while Yehuda and Heifetz walk in the first act.)

Directed by Andrew Leynse, artistic director of Primary Stages, the play has the backdrop of World War II with its horrors and losses.  It deals with many themes -- loss, responsibility, music, politics among others -- and often they become interwoven and too complicated. As with many plays based upon historical characters, the audience has the advantages of knowing history. Yet in a good historical drama you can actually learn something too.

At the performance I attended the playwright was actually in the audience and came on stage to introduce song written by Yehuda Sharett performed by two New York members of the Sharett family. The song, the playwright told us, is known to all Israelis. The piece was moving and impactful.  I had tears in my eyes, but sadly that song is not a regular part of the show. Perhaps it should have been.