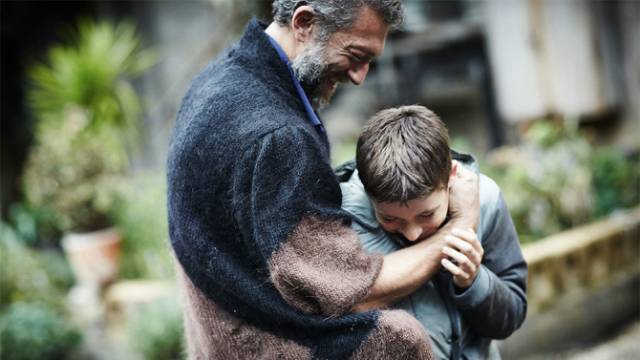 Ariel Kleiman is an Australian filmmaker whose short films have won prizes at both Sundance and Cannes. His feature debut, Partisan, starring Vincent Cassel, is a richly textured, deeply chilling story of a child assassin who dares to question his circumstances. Kleiman’s voice is steady and powerful－a rare trait in first features. We recently sat down to talk to him about his experiences making the film.

I understand that this film was inspired by a New York Times article. Were you looking for material at the time, or did it just hit you that you had to make a feature out of this idea? Can you explain a little about how it all got started?

It was kind of a mixture. I had just finished film school and I was certainly on the lookout for inspiration, so it was kind of a fortuitous moment. With inspiration, you kind of know if you’re into it or not. It’s a hard thing to force. So when I read that article, it seeped into my psyche, my being. It really affected me and I felt it was incredible fertile land for a film. But I knew early on that I was not the right person to make that specific film about Colombia. It was a version of that story that I wanted to tell.

Why did you feel that way?

Well I’m just a guy from the suburbs in Melbourne, you know. I felt like were we to make that movie in Colombia, it’d have to be in Spanish and I don’t speak Spanish [laughs]－it just didn’t feel right for me to do it. And to be honest, what affected me most about that story was actually the human drama at the core of it. The idea that these kids were not allowed to be kids. That they weren’t allowed to see the world through their own eyes and not allowed to grow up. They had guns put in their hands and they were kind of coerced into doing these horrible acts. And to me it was the making of an incredibly grand tragedy.

With that inspiration at the base, did you find that grand tragedy was what you ultimately ended up discussing with the film?

I guess in a way, when I read the article, I was at a point in my life where I didn’t feel like a kid anymore, but I also didn’t feel like an adult. I was in a midpoint, and I felt like I could see both perspectives quite clearly. So to me, when we started writing it with Sarah (Cyngler), it was about－in general terms－the relationship between children and adults, and how precious a child’s soul is, and the tragedy of when they aren’t allowed to see the world through their own eyes. That’s the story we wanted to tell.

It struck me that there was a very deliberate lack of exposition. It feels like you’re there with the boy and you know only what he knows. Can you talk about that choice?

Yeah, it was something that happened initially very instinctually. When we started writing the movie, we started writing it exclusively from Alexander’s (Jeremy Chabriel) perspective. And for me, that was something I was very passionate about. Throughout the film the audience kind of goes on his journey of self-awakening. And it just never felt right to me, for us the audience, to know information that he didn’t. And that’s the way the film was told.

I imagine that you had a backstory in your head when writing the film, in terms of Gregori’s motivation, his story, the historical setting, the women. I got a sense at least, that the women he sort of took under his wing were maybe war widows… I’m curious about what, in your mind, is the untold context.

I mean we wrote the movie for like, two years, and we discussed a lot about backstories for all the characters. I feel like everything we wanted to tell about the characters we told in the film. Certainly what we know is when Gregori (Vincent Cassel) meets Susanna (Florence Mezzara), at the beginning of the film, she’s alone, she’s distressed, she has a bruise on her lip and um, I guess she’s a single mother, and she’s in an incredibly vulnerable situation. And throughout the film we see Susanna, Alexander’s mom, being representative of the whole group, because she’s the one we get to know the most. And I think there’s also a speech at the end of the film where Gregori speaks about the histories and the pasts of these women that gives a bit more exposition to their history…

Right, of course I remember all of those things. I think what was most mysterious to me was Gregori’s motivation. Not that it detracted from the film, I actually thought that the mode of keeping Alexander’s perspective was very interesting, but you know I was just interested…

Yeah, totally. Here’s what I think. I think that mystery and cinema go beautifully together. I think they’re a magical combination. I think in general we live in such an information age, and I often get incredibly frustrated with movies where I feel like they’re just spoon feeding me way too much information. So, I don’t know if it was subconscious or unconscious but I feel like part of me rebelled against that. I always wanted to kind of drench the film in mystery by telling it from Alexander’s perspective. Because in a way that’s what the story’s all about. It’s about this boy living like all little kids do. They kind of grow up with blinkers on. And as you grow up those blinkers slowly start to widen. So yeah, that was kind of the creative choice of the film － to not give people that context, to kind of tell it with blinkers on too and to sort of throw the audience into his journey of growing up.

You’ve mentioned in other interviews that you were attempting to create a sort of “nowhere land”  and I think that certainly goes with this idea of mystery. You shot in multiple countries and cast actors from all over the map. Can you talk about some of the goals you were trying to achieve with this direction?

Early on when we were conceiving the film, I knew I wanted the film to be set in an impressionistic world, a non-literal world to wrap the story in myth, or tell a fable. I remember growing up a lot of the fables I read were set sort of in a middle Europe, they were this kind of non-descript land. And that became the inspiration for the film, to set it in our version of a middle Europe. It was important to let the audience know that this is an impressionistic world and that the story’s not meant to be read literally. We wrote it and meant it as a fable, and we tend to encourage audiences to interpret it that way.

I think it’s very successful in that respect.

...One thing I should say about Gregori though, to answer your earlier question (I forgot to talk about Gregori specifically). For me, the most important part was the fact that he hates the outside world. We don’t know why. They mystery is why does he hate it so much? But what’s important in the film is that he does hate it. And the tragedy of the film is that he’s raising these kids through his hatred and through his insecurities and his fears, and it was that dynamic that was kind of most interesting to me.

Absolutely. So people are calling this a “bold” and “startlingly assured” first feature; and it certainly is an impressive feat for a debut project. Can you talk a little about the experience?

Well I learned a lot, it was really a different experience from everything I’ve ever done. Not only was it my first feature film but previously I had really only made student short films. And student short films are kind of their own beast of filmmaking. They’re very unique in the way that they get put together. So for me it was quite the first time I had all these resources and this infrastructure around me, and an incredible star in the lead role. It was my first time working with child actors.

That must’ve been nuts.

(Laughs) Pretty much everything about it was a new experience, really. And I’m not going to lie, it was an incredibly terrifying film to make. It’s a film that held a lot of challenges, but I feel that if a film lacked that sense of challenge... I don’t know, I wouldn’t want to make it. That’s what makes it exciting.

I think that means that you’re cut out for filmmaking.

That or I’m a sadist. I like to inflict pain on myself.

I think they’re one in the same, ultimately.

I think you’re onto something. [laughs]

So, to wrap things up, what’s next on the horizon for you?

Well, Sarah and I are going to continue writing together, so we’ve started writing a new script. Also, for the first time, people are starting to send me their own scripts and there’s one that I’ve connected to and agreed to direct. So, I think that we’ll be able to announce that in a couple of weeks. It’s a TV project in Australia that I’ll be working on next year.