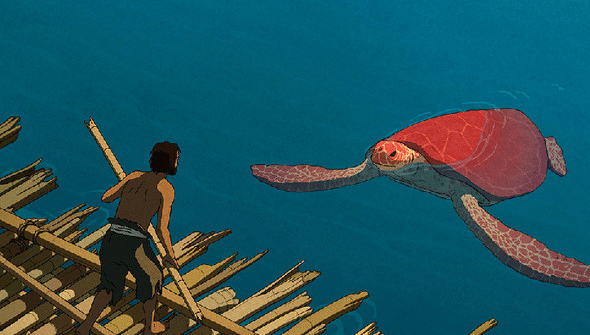 Director Michaël Dudok de Wit’s The Red Turtle is an exquisite film that explores fate through the tale of a nameless man who wakes up on a deserted island accompanied only by the title reptile. Using breathtaking animation, we follow the man as he becomes familiar with his surroundings and realizes there is much more than meets the eye. The film seems inspired by timeless myths, and has a peace to it that makes one think of classic Japanese cinema, which is why it’s no surprise that the film was co-produced by Studio Ghibli. After premiering at the Cannes Film Festival in 2016, the film became a festival darling, and eventually earned an Oscar nomination for Best Animated Feature. I spoke to the director during his pre-Oscar visit to New York to discuss the themes in the film and why hand drawn animation is here to stay.

This is not your first Oscar season, how is this different than the last time?

Short films felt more like my thing, with a feature film you represent 200 people, everyone who worked on the film. So this time I feel more like an ambassador for the film, rather than it being my baby. Also, short films don’t make a profit, so you celebrate whatever success they have, with a feature you have to think of distributors, so prizes aren’t only good for your personal satisfaction, but also to have it show in cinemas.

Why make short films at all then?

The answer is simple: short films allow you a freedom feature films don’t. I’ve seen thousands of short films and they can be very individualistic, with a feature you have to have a minimal commercial value which I like too.

Was the process of expanding your MO into a feature a challenge?

Yes, this is a co-production with Studio Ghibli, I adore their films since the first time I saw them in the early 90s, they also make very individualistic, personal films. At the same time they appeal to general audiences, they aren’t for a tiny elite.

I’ve noticed that animated films affect me more on an obvious level than live action films. After watching your film I wanted to die from sadness…

Thank you for the compliment!

...anytime! The Red Turtle hit a nerve films by Pixar, and classics like Bambi and Dumbo did. Do you think animation is better at touching emotions and is that why you wanted to make animated films?

No, I never saw myself as someone with the skills to direct a live action film. I’m relatively quiet, I like being alone, and to ask actors to do things wouldn’t be something I’d want. From my earliest memories of childhood I drew a lot, it’s my natural environment, so the choice to become an animator was obvious. I watch live action films for reference because they use film language in a more effective way though.

I think animated films deal with mortality better than live action films. Would you agree with that?

I can only talk for myself, I’m fascinated by stories behind complex lives. I like stories that have to with death, nature, visual stillness.

I read that it was the Ghibli executives who told you to cut dialogue from the film. Films without dialogue sound like tougher sells because they seem more “artsy”, right?

Yes, the film had very little dialogue originally. The characters spoke a little, but when we did animatics with voices they looked out of place. Ghibli executives thought the film would be clear without the dialogue. My short films don’t have dialogue, it felt more natural for me, films have many languages not just sound, but the composition, timing and you can say a lot with that. The other thing about this story is you don’t know a lot about the characters and if we heard them speak you’d know what country they’re from for instance. I think in the film you know they can talk, you just don’t hear them talk.

The Red Turtle reminded me of Tanna in that they could be set at anytime.

Yes, when they go to the Christian settlement in Tanna it felt shocking.

You don’t decide when your films will come out, and I was curious about the subplot in the film involving the little boy who leaves the island. He is an immigrant looking for a better life, how do you think the film lands given the current political situations in the US and Europe?

That’s really interesting because I hadn’t thought of that. I started working on this film in 2007 and there were refugees but not to the current level. You’re right, the little boy is an immigrant, so I hope the film will convey a little bit more understanding. Immigrants aren’t always seen as people with hearts and souls, just as invaders. Maybe the film will help them develop empathy. 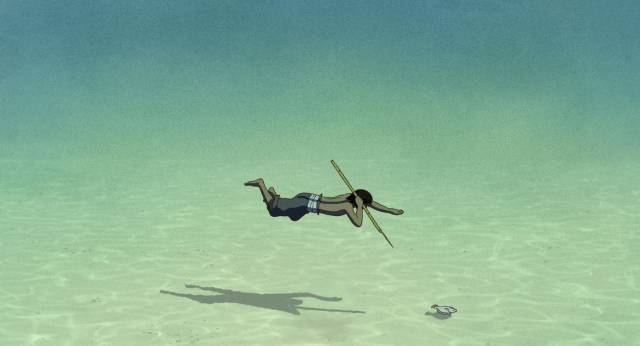 You also show the side of immigration that never is discussed which is people leaving their homes because they simply have no other choice.

It was not conscious, I didn’t think of it until now. Interestingly a lot of Oscar nominated films deal with this subject too. Basically the problem of refugees was building up and now it’s a volcano, no one paid enough attention and now it’s important we do.

Given that ultra conservative movements are on the rise in Europe as well, has this made you rethink what your next project will be?

I don’t know what my next project will be about, but it’s time to reflect what’s big in our times. To be perfectly honest with my films I want to tell something in a timeless way, I’m interested in nature and who you are when you’re not surrounded by others.

You mentioned that you love timelessness, I love your crickets commercial for AT&T…

That was written by the agency, they wrote the script and asked me to make the commercial. I don’t know of any animators who write the commercials, they’re not good at selling products, I definitely wouldn’t. Working with advertising agencies, they often come to you with the story.

...what I wanted to get to is that even if phones will change in the future, your commercial will always be gorgeous. Can you talk about why hand drawn animation has remained timeless in a way computer animation hasn’t?

Hand drawn animation has been around for about a century, computer animation is more recent, so the techniques they use are more of their time. I have a lot of respect for computer animation, the level of acting in films like Zootopia is exquisite, but there’s a slickness, purity and perfection about them. Hand drawn animation is clumsy, that’s the charm of the drawing, you can feel the imperfections, it’s like playing music live, it’s never as perfect as a studio recording. Even if you buy a record of a live recording you can hear the imperfections and love it for that. I’m a perfectionist, but my drawings are always flawed. If you forget long enough the weaknesses don’t go away, but they acquire charm. That’s special about hand drawn animation.

I wonder what you think about how adult coloring books are becoming so popular, especially when it comes to allowing adults to explore artistic sides they haven’t been invited to play with? Do you think this might give us animators who maybe never thought they could be creative?

I think so, I don’t see hand drawn animation as disappearing, there’s space for new techniques to be used. My film is a hybrid and features some computer animation for instance...but I’m suddenly thinking of when we made a film in the south of France, not far from the caves where you can see cave paintings. Some of them 10 thousand years old, some twice as old, when I visited those paintings I was deeply moved because I didn’t see primitive men I saw colleagues who were facing exactly the same little graphic challenges I do. How do you convey fur, how do you do a curve? I was so moved because nothing has changed. It’s so deep inside to draw and to see drawings. We start drawing from an early age almost intuitively in a way that penetrates us deeply.

The Red Turtle is now in theaters.

5 Essential Films at FIAF’s ‘Animation...
Review : The Red Turtle
Review: The Most Surprising Element in ‘Isle...
Review: In This Corner of the World