August 9, 2017
Film
Animation
Sunao Katabuchi
Review: In This Corner of the World 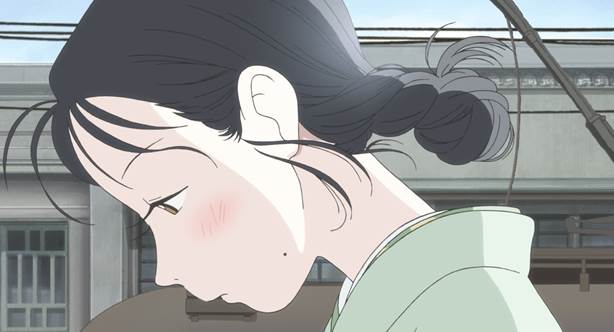 Hand drawn animated films have become a rarity in these days, which is why most of the ones still being made are  to be respected and admired. In This Corner of the World fits into that category and features every stylistic attribute that Japanese animation fans will adore. The attention paid to costume, landscape and character is lovely and lush. The scenes that show the care given to meal preparation, steaming pork buns, o-nigiri, pickled vegetables and thick stews, could spark the appetite of anyone. And even the wind blowing strands of carefully rendered hair, the vast fields of rural Japan, makes one yearn for the countryside.

In This Corner of the World focuses on a young woman's life, from childhood to adulthood, into marriage, and World War II, showing the absolute catastrophe of the Hiroshima bombing, including its aftermath.  There are many animated films that portray wartime and what makes movies focusing on this subject powerful is not only the tug on heart strings, but also the overall perspective and philosophical point they offer. What makes films like Persepolis or, perhaps more apt, Grave of the Fireflies, so unforgettable is their focus. At times In This Corner of the World seems to lose its concentration and its aim. Subplots and detours create a buffer from the main objective which is that compassion, empathy, and love will indeed be the cathartic caress to a war torn society. The end does wrap up in a refreshingly positive turn.

Considering it's based on an entire manga series, it's no wonder that the film feels like it takes too little time to fully encompass this story. A lifetime is spread vacuously thin in the space of two hours. That being said, In This Corner of the World not only has beautiful, delicate illustrations to offer, but also shows the aspects of a woman's life, and an artist's life, that are sometimes not given the attention they deserve. Although there are some quick scenes of brutal candor, the film is a reminder that war is an unnecessary travesty that leaves behind many unheard voices and unseen faces, not less real than those who experience it through combat.