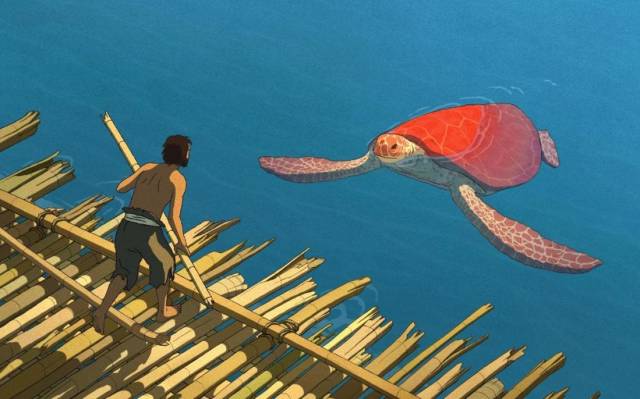 If The Little Prince married Princess Mononoke, their movie life would be something like The Red Turtle. Not with words or content, but how it might feel. Like French-pressed coffee and Japanese tea alone on a beach, without a morsel of food, not even a baguette crumb. A bit sad and painful, having nothing to eat, nothing solid to pair with two such ceremonious cultures. But then you realize that there are far more interesting things in life than food, and slowly, suddenly you feel a brief, most tender kiss upon your cheek, as if discovering Life of Pi’s magic pearled within the grains of sand. This is the feeling of The Red Turtle.

Dutch animator Michaël Dudok de Wit has been an outstanding artist for decades. How he renders humans for example-- even his portly monk from The Monk and the Fish-- are strokes of delicate grace. He’s a master of the drawn line, economically revealing so much with so little. Hayao Miyazaki’s Studio Ghibli animation is also sensitively styled, immediately recognizable to fans as possessing far more spirituality and depth than mainstream animé. So when two such geniuses combine forces, filmgoers are really lucky. A sumptuous visual feast is guaranteed. How light plays against each leaf, or the way each star illuminates the night sky, rich colors and shadows grazing each other…each detail bears a friendliness and humble generosity that’s exquisite to watch.

There’s no dialogue in the film, and words are unnecessary, but by no means is The Red Turtle a quiet film, however. Nature’s chamber orchestra spools through its narrative: the assertive bird calls ripping through the skies, the ferocity of water in torrential rains, the assault of tidal waves hammering against creation, or on a different day-- gently caressing laps. The snap of bamboo trees, the scuttle of hermit crabs, the chilling echo of a deep impassable rocky cove-- sounds beyond the thinking brain are what commands this track. It does something to the mind, too, not having to attend to the meanings of words or phrases to get a movie.

Yet even beyond the breathtaking visual and audio offerings, something far more important and profound motivates these animation maestros. What makes this film so stunning is the way it (often) gaspingly shows what wondrous things can happen when a small and vulnerable man realizes his actual smallness and vulnerability, and learns to strum in harmony with nature’s grand orchestra. Not spectacle-wondrous, but relationship-wondrous… while our nameless everyman, struggling to survive utterly alone, is in fact, not alone at all. Aren’t we often told this, especially in our darkest moments; yet how many of us ever truly believe it? It’s much easier to find sentient beauty while watching our stranded island survivor pull all stops in order to exist. He’s oblivious to what we can see as a rapt audience, undistracted by dialogue or conventional content and with nothing to figure out. Only by having his defences and ambitions stripped away can he connect with his natural phenomena. Yes, it sounds like Rumi poem, doesn’t it? No denial. The real wonder of The Red Turtle, is how satisfied and yes--fulfilled one feels from watching it, like having the cracks of a holy cup repaired, and finally being able to drink deeply.

5 Essential Films at FIAF’s ‘Animation...
Interview: ‘The Red Turtle’ Director M...
Review: The Most Surprising Element in ‘Isle...
Review: In This Corner of the World