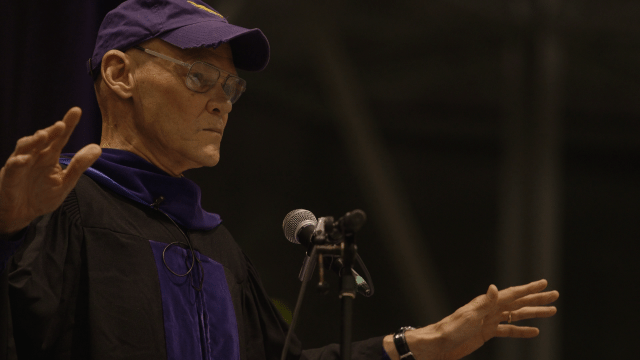 The marble pillars of American higher education are eroding. Unless one is directly affected by the changes involved, the breakdown isn't getting noticed. Starving the Beast is the first and only film thus far addressing this crisis. Among the major threats to these pillars are: lower selectivity in student admissions; advances in digital technology and online learning; demographic changes; reduction in state funding equals increased tuition hikes (and students still unable to pay back their loans even decades after entering the workforce); and political disruptions in the professoriate (including doing away with tenure).

Starving the Beast takes a hard look especially at the latter two threats as primary chainsaws against the most prestigious public universities. With states steadily withdrawing grants for schools, financial starvation has been the most effective blow thus far. Starting with reform-minded think tanks and foundations cropping up in the US, these groups have great influence in urging higher efficiency and performance, along with wanting universities to operate more like businesses based on their financial power. They object to "intellectual elitism", arguing that the traditional methods are outdated, and tenure is seen as a dead weight in the canal.

What we have in this film are several brawls with similar opponents. In one corner, the Goliaths of higher learning claim to possess the torch of truth-seeking, foster collaborative discussion and intellectual freedom- traditional standards of excellence. James Carville is featured prominently in the film as a clarion call from the pulpit espousing our founding fathers tradition. Arguably the Goliaths have self-defined what excellence truly means. They're wary and resistant to change, yet do make persuasive arguments against such changes. In the other corner, the Davids are wealthy policy-minded naysayers. In most of the film's cases, the Davids are seen as rich troublemakers with a tyrannical, sometimes bi-partisan, agenda. Those taking the blows of forced resignation, outright firing or censorship, are university presidents or tenured faculty who are beloved by the students, or fighting for the rights of the poor (while criticizing Republican policies). This occurred at several prestigious state universities featured in the film. Think of when recently, news of Sesame Street's ousting of 40 year TV veteran favorites Bob, Luis, and Gordon, hit social media. First they were rendered obsolete. Outrage from the public brought apology and explanation, and a mild recanting. Similar are the Goliaths bearing such attacks in the film. Whether these Davids are fairly characterized is uncertain, but the film doesn't flatter them one bit.

For now, the great institutions of higher learning will remain standing, but it's worthy to be aware of the deepening cracks which make them vulnerable to changes. We don't see yet how this will affect the direction of future generations, but based on the current prognosis, it won't be the same.