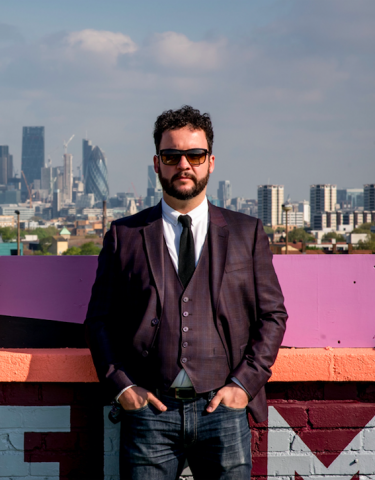 For someone who’s spent most of his life living amongst circus artists, you’d be surprised to hear Gerry Cottle Jr. confess that caffeine makes him “jittery”, which is why instead he’s sipping on a fruity tea concoction when we speak on the phone. He’s in Miami, scouting spots for a potential venue for his successful Rooftop Cinema Club. First launched in 2011, the business combines underused spaces (rooftops!) with screenings of “comfort food” films. Audience members cozy up in oversized deck chairs and, popcorn, champagne and wireless headphones in hand, take in stunning sunsets in New York, London and Los Angeles before watching classic and contemporary films like The Godfather, Moonlight, Breakfast at Tiffany’s and others, personally selected by Cottle.

Screenings usually sell out, partly because of the films being shown but also because in the age of social media Cottle has created the ultimate movie watching experience, in which audience members can have the communal feeling without being annoyed or distracted by loud popcorn chewers and the ever present film commentator who feels the need to loudly express his thoughts on each scene. Here’s the rest of my conversation with Cottle:

You grew up and were a trapeze artist, now you show people movies from up in the sky, so you’re combining your passion for film and the rush of the heights. Did you ever visualize this idea up on the trapeze?

It’s funny you compare them, because my dad and I loved artists growing up, even though he runs a circus I knew I didn’t want to do that, and yet now just like him I also sell popcorn to make a living. They’re not too far apart, our job is to entertain people, to make them smile and show them a good time, so in that sense the apple didn’t fall too far from the tree. When I was a young boy I remember watching my dad in the circus and he wouldn’t really watch the acts, he was watching the public, his passion was for entertaining people, it made him happy to see their faces light up. I get great satisfaction watching people smile, especially with what I do which deals a lot with nostalgia, so I see people sing and clap their hands.

You’re in Miami and this summer you’re showing Moonlight which takes place there. Any coincidence?

It’s great to be in places like these, today is really warm and hot which makes a difference when you run an outdoor cinema. I’ve seen a lot of places, and in a city like Miami you feel closer to the sun when you’re on a rooftop. I love hearing people’s reactions when I talk to them about what we do. When you can combine people’s love film and their passion for the outdoors, it’s great!

I’ve heard you use Google Maps to scout for rooftops, so let’s play a game. I’ll mention a famous rooftop and you tell me what film you’d like to screen there. Let’s start with The White House…

W maybe? (Laughs) Or that recent Obama film which I haven’t seen but have heard is quite good, or maybe JFK.

You’re really gonna test me now aren’t you? I’m not really a film buff, I love film but I’m not a scholar.

How about Angels and Demons?

It’s gotta be a Bond movie! Maybe The Iron Lady too?

What about the Sydney Opera House?

I need to think of a scene. Help me out here.

You can have a Nicole Kidman film festival.

So I can screen anything I want?

Nicole Kidman is great, I love her. So let’s do that.

What about the Grand Canyon?

An Evil Knievel documentary. But isn’t this cheating? How is the Grand Canyon a rooftop?

We’d screen the movie at the top, not down in the Colorado River.

Everest surely, or anything snow related. But no, Everest should be it. The only problem is I’d be worried about everyone actually making it to the film, I’d have to make sure there was a hot chocolate machine at the top too. Getting down you’d need to be creative, people would be tired after climbing so to get them down we’d have a massive zipline.

By now you’ve probably seen every movie you love on the big screen, is there one you haven’t been able to screen big?

I love all the movies I show, but one film I haven’t shown is Star Wars. I’ve never been a big fan and when I say this to people they wanna punch me, but I’d like to play it because of the wordplay between the title and the outdoors sky. It would be fantastic to show it that way, but I’ve never been able to get a license.

I don’t really watch movies at home, I watch most of them in cinemas. So I know what you mean, but cinema in my life is about going somewhere to see something on the big screen. I know people are downloading films to watch at home, but I’ve seen the difference between watching a DVD and watching them on the big screen. That’s the real experience!

5 Essential Films at FIAF’s ‘Animation...
5 Reasons to See ‘The Passion of Joan of Arc...
The Marriage of Film and Theatre is on Display at ...
7 Essential Arts and Culture Documentaries at DOC ...