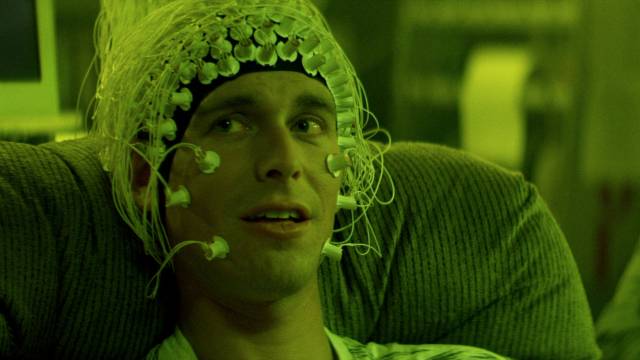 Opening with a spiritual gravity as profound as the title, Listening starts off with impressive shots of a temple that are distracted by the uncalibrated melancholia of the main character David (Thomas Stroppel). The film is set in a world that mirrors our own. The exception: two Cal Tech students are on the verge of a breakthrough with the creation of a mind-reading machine. Both are broke. David is threatened with a failing marriage and future eviction from his home, and Ryan (Artie Ahr) surreptitiously robs the pantries of his scientific collaborator and friend.

In order to have the necessary equipment to fund their project, they steal gadgets from the university, endlessly toiling for a solution that doesn’t become illuminated until Ryan meets Jordan (Amber Marie Bollinger). She gains the idea of injecting the spine with nanotubes. The result is a form of telepathy akin to a co-inhabited acid trip. What they accomplish would have a massive effect on neuroscientific and psychological analysis until a trap from the CIA binds them to work for a boss who wants to exploit the technology. Once David learns of the overarching conspiracy that portends doom for the future of humanity, he escapes, sequestering himself with monks where he learns to master his mind in order to combat the forces that signal the end of human freedom.

The merging of spiritualism, science, and consciousness often ends in odd, disjointed places because the ideas tend to overwhelm the film’s technical progression. Listening is an exception. It weaves these conceptual tensions well. One can admire this ambitious effort through the risks director Khalil Sullins took and the scale of the plot. Nevertheless, the weaknesses glare. One can forgive the jarring acting in the first half of the film because the script does not have an ear for dialogue. The ideas and emotional depth came through by the end, but it is hard to ignore the faltering steps leading towards it. At times, the melodrama was cringe-worthy and the emotional motivations of the characters untenable. With admirable music, cinematography, and an inventive mind, it would be foolish to ignore Sullins’ promise as a director that came at full force by the finale. Watch this film to get a sense for the style of a coming talent.