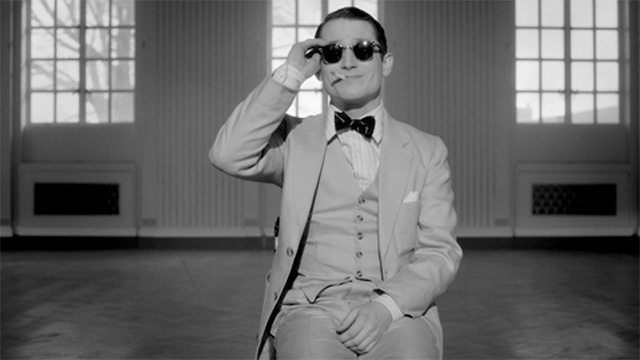 The pairing of the serious, unassuming Harvard-educated academic and the supremely gifted, impulsively wild self-educated artist are what set fire to Andy Goddard’s Set Fire To The Stars. This is the tale of a professor of poetry more known for his association with a poet of creative genius rather than his own body of work. Dylan Thomas (Celyn Jones) is the irreverent, anti-establishment, completely original, zany figure that every hipster wishes they could be, and John Malcolm Brinnin (Elijah Wood) is the ascetic good-person suffocated by the politics of academia that aspiring M.F.A. candidates dread might be their fate.

This film bears noticeable parallels to Amadeus. In that feature, the ascetic Antonio Salieri believes that righteousness and virtue are the paths to great art, beliefs that are annihilated by the true man of genius, Wolfgang Amadeus Mozart, a man more elemental, more earthly, more in alignment with his flesh and lust and senses than more noble morals. Set Fire To The Stars is told from Brinnin’s perspective, who observes Thomas’s genius from up close, befuddled by the personality that creates such beautiful art, like how Salieri tries to make sense of Mozart’s baffling persona. Brinnin captures the interest of academics with the opportunity to bring Thomas in from overseas. His ambition: to introduce the American intelligentsia to the era’s most pure lyric poet writing in the English language. School faculty are skeptical. They had heard tales of Thomas’s debauchery, which Brinnin dismisses to them as mere legend. He soon eats his own words as Thomas wreaks havoc on New York’s nightlife, forcing Brinnin to sequester him in an abode by the woods. Brinnin attempts to establish order to Thomas’s life by offering ideas to impress Ivy League higher-ups and helping him out with scheduling and finances. Thomas, however, cannot be controlled, procrastinating on his duties and living life as he pleases. But when the poet, with hardly any practice, is invited to the lectern to read his work to a crowd, his brilliance is undeniable, riveting the audience with a hypnotic voice and striking poetic imagery that still gives goosebumps to modern fans of his work. By developing a bond with the maddening Thomas, Brinnin begins to gain a fuller understanding about the nature of creativity.

Shot in black and white, the monochromatic touch adds an elegant atmosphere to the film and averts the feature from feeling anachronistic. The score opens with a cool jazz number that doesn’t appear at any other time, the rest of the score puncturing the atmosphere with sounds that enhance the drama. While the imagery is gorgeous, the music doesn’t quite strike the right tone to supplement it. Add that to the over-the-top heavy emotions that border on melodrama, several scenes never quite clicked. One scene that was delicately shot, Thomas writing under a tranquil morning sun rather than yearning for more debauchery, contains an elegance that would have been more welcome throughout. Perhaps the most jarring aspect of the film were lines that the great Dylan Thomas and a Harvard Professor of Poetry would never say, reducing the art and life of the artist to emotional outbursts that border on clichés. Nevertheless, the debut effort showcases the aspiring potential of Goddard, having already proven a talent for handling imagery. While this film has its hiccups, the acting is superb, giving you the closest thing so far to being in the presence of one of the greatest poets of the 20th Century.