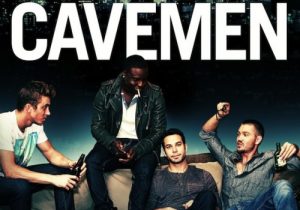 Romantic comedies aren't hard. They still require a great deal of effort, but as far as stories go, they can stay pretty basic. A handsome guy with goofy friends knows a pretty girl, the two don't date for most of the movie, and by the end they realize that what they've been looking for has been in front of them all along. As long as you don't severely mangle the dialogue and you make an attempt to flesh out the characters a little bit, you're good to go. "Cavemen" is not good to go.

"Cavemen" feels as though it was rushed to the screen after only a single draft of the screenplay. Freshman writer-director Herschel Faber has obviously seen romantic comedies, as his film is littered with genre cliches. For instance, there are not one, but two scenes of the leading man chasing after the woman of his dreams as she drives away. He's even got the setup I previously mentioned down pat. Dean (Skylar Astin) is a struggling screenwriter living in LA with his three best friends: Jay (Chad Michael Murray), who has lots of sex; Pete (Kenny Wormald), who is in a tiresome on-again-off-again relationship; and Andre (Dayo Okeniyi), who just kind of cheats on his girlfriend the whole movie. The four live in a converted factory loft they refer to as "the cave", because subtlety is hard. Aside from struggling as a professional, Dean also can't seem to find the right girl. He has a go-to hookup named Sara (Megan Stevenson), but there's no future there. If only the girl of his dreams was just staring him in the face! Oh, did I mention his other best friend is the sexy Tess (Camilla Belle), who he totally doesn't have feelings for? You see where this is going.

So how did Faber screw "Cavemen" up so royally? With completely one-dimensional characters that labor through unpolished monologues about the state of the human condition and forced metaphors to prehistoric relationships. Those descriptions I listed off earlier were, in fact, the only defining traits of each character. And if there's one thing these four LA bros love more than getting laid, it's breaking off into long-winded speeches about their idiotic, er, "meaningful" thoughts on love. One can just imagine Faber writing these lines and thinking proudly, "I'm going to write a romantic comedy with a purpose. I'm going to dissect relationships and make people view them in a new light". Sorry Faber, it all just came off as hackneyed and awkward. Even with some charming performers in Astin, Belle, and Murray, the material falls flat.

I feel compelled to point out one particularly stupid musing on love put forth by Pete. In one of many (many) scenes that feature the four guys drinking around a small table, he says that he gives his girlfriends the "mud puddle test". He hypothesizes how each girl would react if they fell into a mud puddle. Apparently, bad girlfriends will complain, good girlfriends will laugh, but the girl that grabs you and pulls you down into the puddle with her is the one you should marry. It's a nauseatingly cute theory that shows Faber is trying way too hard. It's exactly the kind of sappy sentiment that you'd expect in a romantic comedy, but it fails because it lacks any sort of truth. Do you know how aggravating it is to fall in a mud puddle? Even worse, do you know aggravating it is to get pulled into a mud puddle by someone who allegedly loves you? Now your clothes are ruined, you're wet, and you're second-guessing the sense of humor/sanity of your girlfriend. Complete nonsense. My point is proved later in the film when Pete encounters an actual mud puddle and the scene plays out as completely ridiculous as you'd expect.

Yet another thing working against "Cavemen" is its baffling R rated content. There's nudity here that is completely unnecessary and might throw off typical rom-com audiences. There's also quite a few instances of naughty language being thrown around (usually by Murray, whose character tells three different stories about receiving oral sex) that could have been cleaned up to be PG-13. Don't get me wrong, I love all this stuff when it's done well, but in a cutesy rom-com that is doing nothing to challenge the form of the genre, "Cavemen" couldn't afford this rating. There is nothing here that you can't find better in any other romantic comedy.