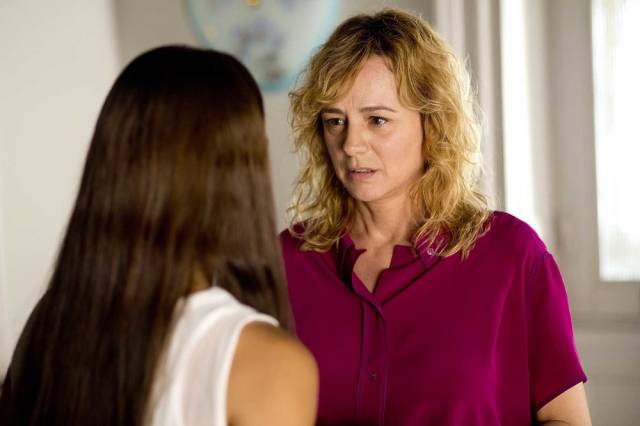 Life at times can seem like a series of unending struggles; the struggle to be a providing parent, the struggle to express true feelings, and the struggle to overcome grief. Struggles that never end but subside into temporal moments where we experience the happiness that makes it all worth it. The films of Pedro Almodóvar conjure and confront these moments of struggle and relief endlessly.

In so many ways Julieta is a summation and a stand-still in the resume of an otherwise daring provocateur, a combination of unapologetically vibrant colors with illustriously brash femininity that unfolds within the love and turmoil of a woman’s life. On the brink of a long promised departure from Spain, Julieta (Emma Suárez) a middle aged woman with a new lease on life encounters Beatriz (Michelle Jenner) the best friend of her mysteriously estranged daughter Antia (Blanca Pares). This sends Julieta into a spiral of dejected, wanton longing to recount the events of her life, a purging of the truth in hopes that in the very least she can set the record straight.

The story she tells, filled with picturesque seaside vistas and lush rural homesteads, impassioned affairs and enduring loves, is marred by death and abandonment and the implications that she has no one to blame for all of it but herself. In her younger years, Julieta (Adriana Ugarte) meets Xoan (Daniel Grao) a seaside fisherman on a snowbound train. After her stint as a teacher of classic literature at a high school comes to an end she and Xoan commit to a full time affair and upon her surprise pregnancy, get married. The focus shifts from here to Julieta’s life as a mother to young Antia (Blanca Paris) and the mysterious fallout that follows. Meanwhile in the present as Julieta recounts her brokenhearted memories in the streets of Madrid her current lover Lorenzo (Dario Grandinetti) follows after her. Julieta is a gorgeous film to look at thanks to cinematographer Jean-Claude Larrieu and Almodóvar’s uncanny work with color motifs, while the performances, especially Ugarte's, bring Julieta close to resonating the deep, seductive turmoil that abounds in other Almodóvar films.

Christopher is a photographer, editor, director, writer, and film critic writing for media formats such as film, television, advertising and public relations. His interests include binging old movie trailers on youtube and organizing his desktop folder of Eric Andre show screenshots.

Interview: Fernando Trueba on ‘The Queen of ...
Review: The Square
Interview: ‘Polina’ Directors Angelin ...
Clouded Visions: The Films of Yo Ota