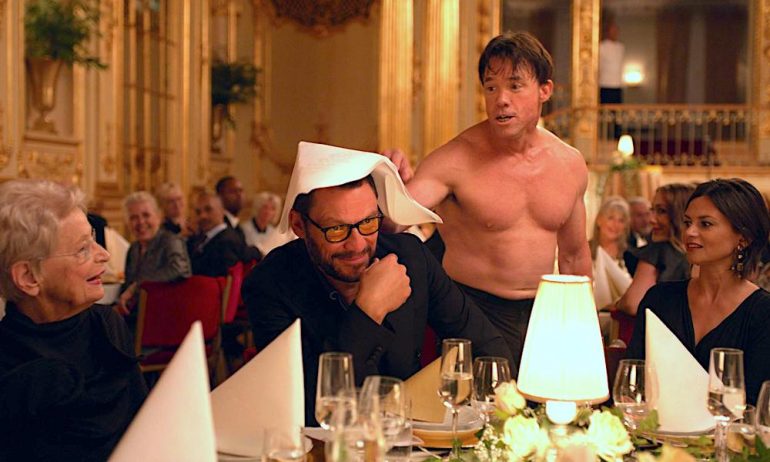 Towards the beginning of Ruben Östlund’s Palme d’Or-winning movie The Square, our hero, a dashing curator called Christian (Claes Bang), finds himself in the middle of a hysterical domestic dispute. After he and another bystander instinctively shield a screaming woman from a charging man, they marvel at the rush they just experienced. Shortly afterwards, our hero discovers his wallet and phone have been lifted, the victim of an elaborate pick-pocketing scheme.

This will not be the last time that we watch characters pay dearly for the brief exhilarating experience of feeling alive. Östlund has ensconced himself in the well-heeled world of the European art elite and the result is a sprawling, almost episodic movie. The fundamental question posed: how do you feel again, in a distressing, numbing world? And what do we pay for that exhilaration?

Two plot-points are more sustained among the many other sequences. The first is that the loss of the wallet leads to a vigilante mission where Christian flyers an entire low-rent apartment complex with accusations of theft. One young boy, who did not steal the wallet and phone, is incensed by the accusation and the punishment he was meted for it and he tracks down Christian to ask for answers repeatedly. The second sustained plot point is about the square of the title, an art exhibit that proclaims a small square space as an area of mutual care and equal rights, which is crassly turned on its head in a viral video by some marketing goons.

Although it is not immediately obvious, both of these plotlines, along with countless other thematic tributaries somehow tie together class, exploitation, and cheap thrills. Christian’s adventure with his wallet has him cruising down a highway, pumping Justice’s “Genesis” before balking at the prospect of entering an impoverished apartment complex, while the viral video of the square shows an angelic ‘homeless’ toddler being blown up. When you look at the cost of coming alive, someone almost always has to pay. In a movie dotted with homeless people, nodding off in the street, you are given some idea of who that is.

Most publicity shots of this movie feature a simian performer (Terry Notary), standing on a table. This is a late scene, presented with little context. It is a performance integrated into a museum donor’s dinner, which gradually mounts in danger until the staid, tuxedoed donor class are whipped into a frenzy. Their dinner ticket, presumably in the five figure range, pays for a moment of throw-down, fury. The question here is the same posed in all of the other plots, be they major or minor: how do you trick yourself into feeling again, at what cost, and at whose disposal?

With so many variations on the central theme, we begin to see that the only real difference in these variegated situations is who sets the rules of the game, and who decides if they are permissible. One sure thing: it’s never the poor.