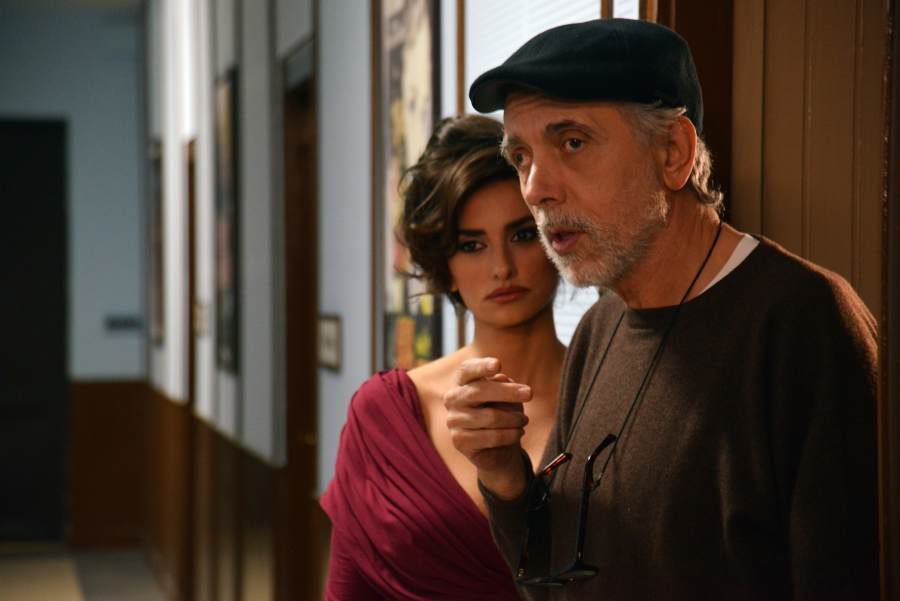 Almost twenty years after The Girl of Your Dreams director Fernando Trueba reunited with his cast and crew for a continuation of the story called The Queen of Spain. This time around, the plot centers around the homecoming of “the girl”, Macarena Granada (Penélope Cruz) who returns to Spain, after achieving success in Hollywood, to star in a historical film about Isabella I. Little does Macarena know that her former director, and flame, Blas Fontiveros (Antonio Resines) escaped the Nazis and is back in Spain where he’s taken prisoner by Franco’s regime. Together the motley crew including theatre diva Rosa (Rosa Maria Sarda), leading man Julián (Jorge Sanz) and a hilarious production assistant called Pepe (Javier Cámara) come up with a plan to rescue Fontiveros without disrupting the film shoot. I spoke to Trueba about the classic Hollywood references in The Queen of Spain, reuniting with Penélope Cruz, and how a film in which artists try to defeat fascism couldn’t be more timely if it tried.

So making The Queen of Spain allowed you to discover what happened to them?

Yes, I didn’t set out to make this movie, rather this movie started making itself. In the years after The Girl of Your Dreams came out people would ask me “does Fontiveros die in the end?”, I didn’t know! I only knew what was in the film, what wasn’t there hadn’t been made. I wasn’t trying to be cynical but that’s how it came out. I wanted to come up with a better response, so I started telling people that Fontiveros died. Then I wondered, why? He wasn’t trying to kill Hitler, he was just a Spanish movie director, so he’s in jail, which made me think they would forget about him near the end of the war. Little by little I started answering questions about what was beyond the film. As the years went by I wondered what happened to Macarena, what if she became an international movie star? Until one day I decided to talk to each of the actors, some of them I met for dinner, others at film festivals, or premieres. They all loved the idea, shooting the first film was such a happy time for all of us, and they were nostalgic about it.

So I started working on a screenplay. The first film takes place during the Spanish Civil War as Hitler rises to power in Germany, I thought it would be great if the time span between both films was the same in real life and in fiction. I decided to set the film in 1956 when Americans started coming to Spain to make films, so I wrote the screenplay in 2014 so we could shoot the film in 2016.

Only in how they both found success in Hollywood and also do films in their home country. I played with that a bit, that’s why Macarena is also an Oscar winner. I liked using mirror images.

Structurally both films are mirror images as well. In both of them we see Macarena go face to face against tyrants, both put their characters in similar comedic situations, and both have stunning musical numbers not done in Spanish.

You’re right, I wanted the films to be very different but also to have things in common. In Girl everything happened during a film shoot, and both the movie they were shooting and our film shared a name, so I wanted to do the same in this one. In the first one I used newsreels of the era for the opening credits, in this one I went a step beyond and used newsreels to comment on how the world had changed in the years between films, but also to see the characters evolve. As for the musical sequence I wondered how I’d be able to include a song, since the film they’re shooting is a biopic of Isabella I Queen of Castile, there was no room for songs. Suddenly I jokingly thought about how Hollywood looked at history in a very superficial way, so having Isabella I sing “Granada” after conquering Granada made sense. The idea made me so happy.

“Granada” is a song by Agustín Lara, among the Easter eggs you have in the film we see Mexican filmmaker Arturo Ripstein play a producer, so it’s like you gave a part to the Agustín Lara of filmmaking.

How did he end up in the film?

I’m very good friends with him and his wife, she also has a cameo in it, she’s in the bar of the brothel we see near the beginning of the film. One night I was having dinner with them at home, I’m always teasing him because he was an actor when he was young, but he doesn’t like when people remind him of it. I told him I was keen on watching one of his films and he said it was out of print; however, one day I found it on DVD. Of course I bought it, gave it to his wife and told him about it. We watched it together and had a blast. He was in his 20s, and the film was terrible, so he asked me to give him a part in my new film. He said he could play an American because he spoke perfect English, I didn’t know he’d gone to school in America and his mother was from the US. He proved his accent was flawless and that’s how he ended up in the movie.

You also have a The Princess Bride reunion with both Mandy Patinkin and Cary Elwes showing up in the film.

Mandy came first, he was the perfect type for the thinking man, activist, persecuted-by-McCarthy writer I had in mind. I was trying to find someone to play the Hollywood actor, it’s an important part but it’s not very big, so no one would want to play it. Because we had Mandy I remembered Cary, I wondered what he was up to, I’d last seen him in Bogdanovich’s The Cat’s Meow, I looked him up and he was perfect for the part. My favorite thing about Cary is that he’s funny, leading men don’t usually like making fun of themselves, they’re quite narcissistic, but Cary is such a clown, he’s worked with Mel Brooks, he know how to laugh at himself. He loved the screenplay and I’m glad he did, because he’s a great guy. 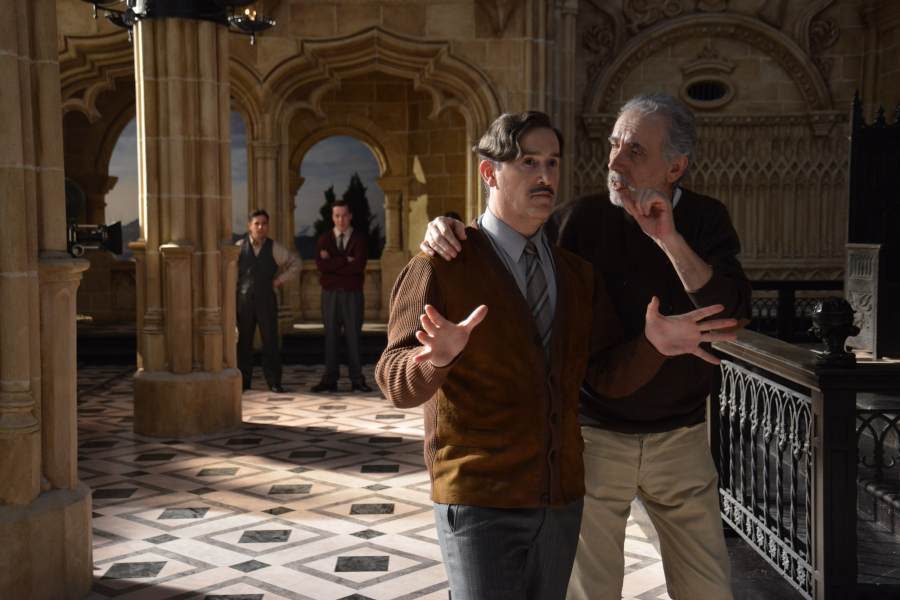 The director in The Queen of Spain is based on John Ford, right?

More than based, he’s inspired by him. John Ford was very tough, our director is much more tender.

John Ford is one of the most versatile directors in history, similarly your films are so different from each other, in the last few years you’ve made a historical comedy, a black and white drama, and an animated film. Is john Ford the classic Hollywood director you identify with the most?

No, the classic director I identify with the most is Billy Wilder. In a romantic way I also feel an affinity for Preston Sturges. I admire John Ford, he was a great storyteller, he was so tough, but his films are full of poetry. I feel my gaze is closer to Wilder, Renoir and Lubitsch.

The Girl of Your Dreams and The Queen of Spain seem like siblings to To Be Or Not to Be.

I wish they were siblings! Maybe they’re debtors. To Be or Not to Be is such an inspiration, if you’re doing a comedy set during a difficult time, then it’s the best model of how to make a film. Hitler was alive and kicking when they made it, so it was riskier back then.

Is it surreal for you to have your film come out in the US during a time when Nazis are back in the news?

It’s not only in America, it’s also happening in France and Spain. All those people who have always been there sitting quietly, suddenly came out of the woodworks. There are places like Hungary where they’re in power and doing anti-democratic things, even the EU is wondering if member countries can do things like that. Brexit in England was part of this too, it’s as if we’re keen on devolving, to turn back on things that have taken us decades to accomplish when it comes to human rights, women’s rights, racial equality...things we didn’t think anyone would question anymore, and here we are back in this nightmare. I’d like to think this phenomenon is giving its last breaths, trying desperately to stay alive, but that would be excessive optimism from my part. They have power and they have money, look at the American president.

I like you brought up optimism, cause in The Queen of Spain we see how art can make a difference. Art and films can save us, can you talk about how not only making films but also watching films has helped you?

In America art is often seen as an industry of entertainment, not that it shouldn’t be, Shakespeare and Sophocles were entertainment too. But art is what makes us human, much more than anything else. We’ve discovered animals can show love and also have communication codes, but humans are the only ones who can tell stories. That need we have to tell stories is because life can’t only be explained through science and history. Art helps us live, it makes us understand life in an emotional way, art allows us to live other lives, to have empathy, to look at the suffering of others and cry with them, or to laugh with them. I think even the most escapist comedy helps you live. Groucho Marx helped people live, he allowed people to relativize things, and to laugh at them.

The Queen of Spain is now in theaters.

Interview: ‘Polina’ Directors Angelin ...
Interview with Imelda Staunton of ‘Finding Y...
The Shots That Won These Classic Films Their Best ...
Interview: From ‘Hamilton’ to Bollywoo...