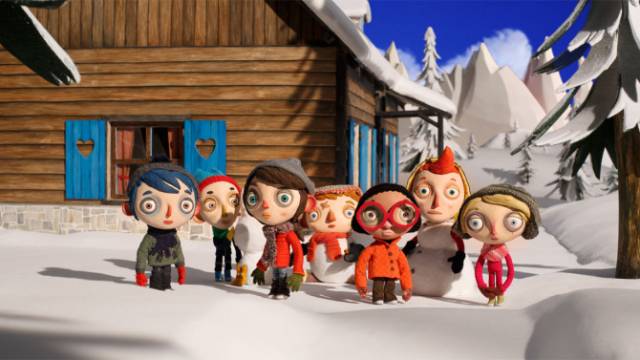 With red frosted noses, sleepy bobble eyes, and oversize, oblong heads, the stop-motion munchkins of My Life as a Zucchini are figures approached with curious affection. The trim and snug Swiss-French co-production about an orphaned boy is a moving animation of the stop-motion variety where the darling objects have a well-worn artistry of delicate ornament, without the sleek roundness of digital animation. In an opening sequence worthy of silent cinema, a cerulean-haired nine-year-old nicknamed Zucchini happily sketches superheroes in his attic sanctuary, then tiptoes around his inattentive mother seated in front of the soft glow of the TV. His sheepish reticence is spelled out wordlessly as empty beer cans plink across the floor, solidifying the gloom of parental negligence.  As his mother approaches the attic, Zucchini shuts the door, causing her to fall to her death, and quickly finds himself at the police station. In a sobering scene, he assesses his relationship with his alcoholic mother with candor: “Sometimes we had fun, other times we didn’t.”

Whether Zucchini did or did not cause his mother’s death figures mildly into the story and his grief. The script, adapted from Gilles Paris' book by Céline Sciamma -- who as the writer and director of Girlhood is not unfamiliar with depicting the more painful aspects of growing up -- excels by neither skirting nor dwelling on any sensitive issue, like the best crafted response an adult might supply an inquisitive child.  This economy of the expository extends to the swift-but-honest backstories provided for each orphan. One boy's mother spent the whole time opening and closing the fridge, and a dainty girl who prefers to hide behind a sweep of her hair had “a father who did disgusting creepy stuff to her,” as relayed by resident bully Simon. He and Zucchini square off, but it’s quick to end as Zucchini wrestles with the idea of being alone. The children form a makeshift family and band together to help a new girl and Zucchini's love interest Camille (whose own backstory is tinged with murder) from her wicked aunt, a temporary guardian hoping to become a permanent one. The aunt is the lone instance of a bad adult as the script tempers the evil and safely relegates their crimes and flaws to those expository mentions. The home is a safe haven with benevolent adults, from the orphanage headmistress to the two young teachers. The warmest story line comes by way of the policeman Raymond, unofficial onlooker and Zucchini's new friend who is not without some of his own sadness.