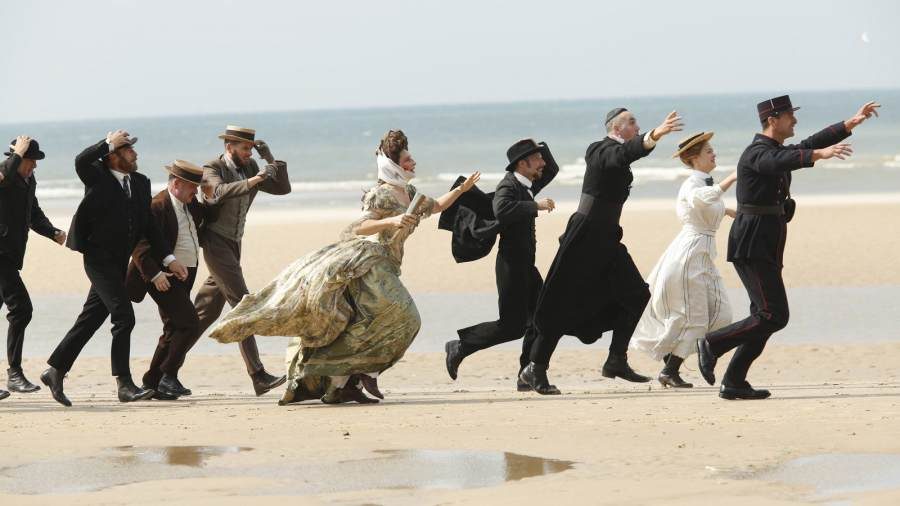 Watching Slack Bay is like listening to a stranger's overlong joke. Eliciting at first a mild laughter, the anecdote trails on, leaving your politely affixed smile now paining your face. Bruno Dumont's follow-up to Li’l Quinquin runs an unhurried two hours, a treat or abuse depending on how well you take to its mood and the stylized nature of the acting, which harks back to slapstick, but here is woefully exaggerated into the realm of the absurd. It’s not unlike a protracted Monty Python sketch with a giddily upper crust French flair. The excellent cast, however—Fabrice Luchini, Valeria Bruni Tedeschi, and Juliette Binoche among them--are up to the task.

Set in early 20th-century France, where ladies decorate their faces with bonnets and the men accessorize with pocket watches and mustaches, the film presents a murder mystery set to tune of high and low class divisions. Bourgeoisie vacationers start to vanish, while the Van Petteghen clan summer in their neo-Egyptian style home overlooking the picturesque Opal coast. A pair of tweedle-dee and tweedle-dum detectives, one large and one small, does their Keystone Cop best to solve the mystery. The culprits are, and this is no spoiler, Monsieur Brufort and his elder son Ma Loute, humble oyster shuckers and fisherman who earn their wages ferrying the rich across the titular bay by boat at high tide and in their arms when not, a nice sight gag. Dumont films the beautiful coast and marsh with a sheen of pristine azure, both cold and alluring.

The Bruforts are also cannibals while the rich are buffoons, due in part perhaps to inbreeding. This is a movie where one character might squeak like a balloon with each step and another might inflate and ascend heavenward like one, too. The women flail their arms and coo in cadenzas, but the third or fourth trill can grow tiresome, even from a pro like Binoche. The family Brufort exhibit a brusquer demeanor, grounded to the damp sand of their shore-line district, rendering them more tolerable than their upper-class counterparts atop the cliffs, lazing about with their heads and noses in the clouds. This makes the humor effectively dark and the violence surprisingly grotesque, such as when Maman Brufort dangles a bloody foot in front of her sons for dinner. A romance arises between Ma Loute and Billie Van Pettighan (Raph), a genderqueer teen who spends equal time between petticoats and suits. Theirs is a touching romance, not only for the decidedly modern identity politics, but because the twosome are aware of the petty convictions of their parents. Their knowing giggles and refreshing discernment cut through the farce and foolery of the adults and the film at large.