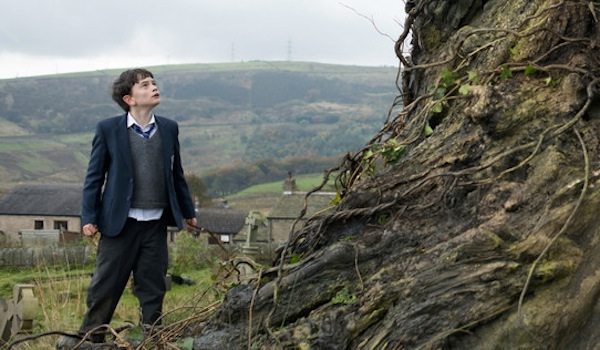 As far as creature features go, A Monster Calls stands out as an exceptionally sentimental one. Indeed, the monster in question is essentially a manifestation of a boy's complicated emotions in the face of heavy loss, heavy bullying, and just the general heaviness of growing up. This central conceit, at once unique and loosely familiar, builds through a painterly lens to a stirring, tear-soaked testament to the coping powers of art and the imagination.

Written by Patrick Ness (who also penned the source novel), and directed by J.A. Bayona, A Monster Calls tells the story of Conor (Lewis MacDougall), “a boy too old to be a kid, too young to be a man.” His mother and father (respectively, Felicity Jones and Toby Kebbel) are divorced. His dad lives across the ocean and his mother is terminally ill, leaving Conor more or less in the care of his staidly strict grandmother (Sigourney Weaver).

Enter the monster (voiced by Liam Neeson), a 40-foot giant who looks like he’s made out of tree roots. He does, in fact, emerge from an ancient yew tree and the earth below it. Creating a healthy bit of destruction on his way in, he tells Conor that he is going to return to tell the boy a series of stories and then Conor will have to tell one of his own. Through a succession of visits and stories, the monster acts as a kind of spirit guide to Conor, helping him to find an inner strength within himself; a strength that at times is destructive but ultimately redeeming.

The film is composed of graceful, storybook visuals throughout that, mixed with rather dark themes, make for an overall heart-wrenching affair that challenges even the stoniest among us to not spring even a tiny tear or, at certain points, to feel a fiendish thrill when the monster and -- by and by -- the boy start breaking and smashing things. Intertwining fantasy and reality, it is also a meditation on the nature of stories and why it is that we tell them, and how stories and art create an arena in which to grapple with the deepest stirrings of the spirit.

The players in this magical drama all do a superb job in seeming real in a tale that could have slipped into hollow melodrama. A Monster Calls also treads deftly through a complexity of emotions that is frequently lacking in many films. In the broad and varied canon of monster movies, this one will be sure to hold a special place.