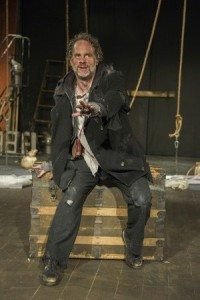 Matthew Spangler and Benjamin Evett’s Albatross, a one-man play, is a multi-media extension of Samuel Taylor Coleridge’s “The Rime of the Ancient Mariner.” In it we find the poem’s titular seaman talking to us in our modern time and expounding his tale, somewhat contemptuous of the poet who, says the Mariner, took down his story and got a lot of it wrong, left out a lot and so on. The Ancient Mariner then spends a while talking about his backstory and how he ended up on that ship in the first place, and gradually he gets into the telling of those familiar parts of the narrative presented by that great Romanticist.

Evett, who also plays the Mariner, gives a strong performance; when he slakes his thirst with trickling drops of rain water it seems like he is truly thirsty. There are moments when he genuinely taps into the terrifying loneliness of the sole survivor’s plight and his remorse for the great sin, the killing of the benign bird, is tangible. The corn in the husk, Evett‘s acting, coupled with some dramatically psychedelic effects, offers a number of niblets to nibble on throughout.

The problem is the husk. The lumbering exposition that takes up so much of the play adds little of any substance to the figure of the Mariner, while it does much to wither the fantastical mysteriousness of him and the multifaceted symbolic value with which he is infused in the poem. In Coleridge’s poem, the Mariner is this strange, spectral figure who has emerged from the alchemical furnace of nature—which is aligned with the forces of the imagination—transformed into a kind of immortal, fathomless carrier—himself a sort of animated poem, a walking dream—of a prismatically interpretable allegory of love and ecology and creative forces and so on and so forth; who he was before doesn’t really matter as he is forever after completely encapsulated, completely defined by that mad journey into primordial seas.

It is all well and good to create new interpretations of previous works and inspired adaptations of the same. Albatross, though, doesn’t really interpret Coleridge’s poem or engage with it in a meaningful, personal way; it more or less just adds a lot of unnecessary fat to the haunting skeleton of the source material, pointing constantly, redundantly inward on itself. It is indicative of a trend towards what might be deemed a soft-core postmodernism, a masque of self-awareness and self-referentiality that stabs out with a kind of surface irony that can only fall in on its own hollow self in the end.

The Albatross runs at 59E59 Theaters through February 12.

Review of ‘Golden Shield’
Review: Prayer for the French Republic
Review of ‘The True’
Review of ‘Less Than 50%’