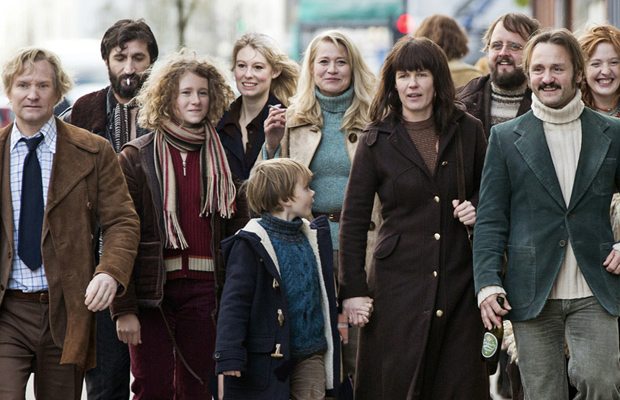 The Commune opens with a polished, middle-aged couple and their teenage daughter touring a mansion. We soon learn that the father, Eric, (Ulrich Thomsen), inherited this dour and cavernous house, and his wife, Anna, (Trine Dyrholm) is angling to move in rather than sell it. Their daughter, Freja, (Martha Sofie Wallstrom Hansen) mostly just listens in the half-detached manner of a child. Anna, a spirited and sharp woman in middle age wants to start a commune in the huge house. Rent rooms; set house rules; foster creativity and camaraderie. She convinces her husband, and they assemble a motley crew of hippies, leftists, earnest do-gooders and strays.

Danish filmmaker Thomas Vinterberg directed and wrote this film. He is most famous for 1998’s The Celebration, a seminal film in both the Dogme 95 movement and digital filmmaking in general. That film was similarly set in a sprawling house and investigated the mechanics of a dysfunctional family. Two decades later, Vinterberg’s style has evolved considerably — with much less formal experimentation intact — but his analysis of the family as a social unit has become more subtle and sharp. The dramatic wrench is thrown by Eric, cagey and prone to tantrums, his theoretical positions thinly veil an infant-like demand for comfort and attention. He is a professor of architecture who likes bludgeoning with his arguments for functional architecture and browbeating proponents of under-theorized counter-cultural ideas. It may surprise some, but certainly not all, that this is also the type who eventually starts sleeping with his 23-year-old student.

As their affair becomes public — as in known — and then public — as in a matter of communal concern, discussion, and referendum — we come to the crux of a movie. How far can we take the rational design of human relationships? Vinterberg elegantly disproves Eric’s false dichotomy between hippie-dippie nonsense and good, strong, rational design. Here we have a rationalized, intentional, and designed household, but it is dictated by notions of sharing, acceptance, and communalism. It is both hyper-rational and founded on an idealistic ethic. Neither side of the culture wars can blame the other for the human carnage that ensues.

Anna attempts to stretch her rejection of middle-aged, middle-class norms into her husband’s sex life, and Trine Dyrholm does an incredible job showing her mounting despair. She anchors and propels the movie. The side characters have less at stake and their development pales too much in comparison to the central couple. Only Freja really does her job as a supporting role. An observer who quietly comes into her own, she is the avatar for the baby boomers’ perspective. It’s a trope that has gotten a lot of use, but here, it serves as the reminder we need: even watchful and understanding, we can’t resist following exactly the same path that they went down before us. The folly of every generation who thinks they’ll do it differently.

Review: The Square
A Review of ‘The Guardians’
Review: ‘Gemini’ Is a Grab-Bag of Dram...
Review: The Most Surprising Element in ‘Isle...