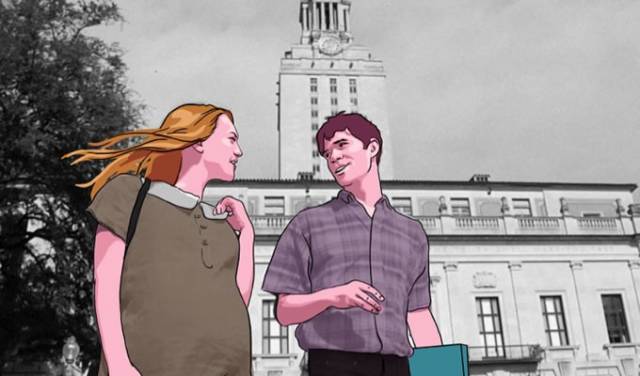 On August 1st, 1966, a sniper, positioned on an observation tower of the University of Texas, Austin, fired down onto the campus for approximately 90 minutes. Forty-nine people were hit, and sixteen died. Tower, directed by Keith Maitland, is a documentary that tells the story. Most of the film is animated (think A Scanner Darkly or Waking Life in style), but real footage intrudes into the film with greater frequency as it progresses.

This mass shooting could be seen as one of several mid-century turning points at which the distinct and peculiar horror of modern society emerged. Other popular contenders were the stabbing at Altamont, the Manson family murders, or in a larger way, Vietnam. The story of America is the 60s is a somehow always told as a fall from innocent grace. Here, we see it acted out over and over, as a sleepy Southern day is shattered in so many heartbreakingly individual circumstances.

But social commentary and historical contextualization fade to the background. Sure, this is a movie that might comment on the media coverage of massive, public tragedies, and gun violence is of course a central theme. It is a movie that begs to be framed in practical, political terms. But Maitland stays relatively tame in his admonishments, preferring to allow only one condemnatory speech to flow through the staid voice of Walter Cronkite.

Nor does it really aim to capture and recreate a vicarious experience of the shooting. This is not to say that it is dry or you are not given any illustration of the event. Bullets ring jarringly for most of the movie and it is a stressful, disturbing viewing experience. But as one of the witnesses puts it: trying to explain the feeling of the day would be like trying to describe a rainbow to a blind person. Although it is by no means a fault of the documentarian, don’t go to this movie thinking that you’ll experience the shooting. Furthermore, consider yourself lucky not to.

What Tower accomplishes is to not only humanize the survivors and victims, but to question what exactly humanity is. One of the first people shot is a pregnant woman called Claire. Her boyfriend, who had been walking with her, and her unborn baby die immediately, but she hangs on, losing blood in the punishing noontime sun for over an hour. The courage of those who try to help her as bullets rain down, and her grace in the face of her devastating losses are the heart of the movie. And all of this forces us to ask, how can some people be so horrible while others are so astonishingly good? I’m not sure which extreme is more unbelievable, but that duality is the essential and permanent human mystery that takes center stage in Tower. And that’s what makes it much more than a mere memorial for the fiftieth anniversary of a tragedy.

A Review of ‘Filmworker’
Review: The Most Surprising Element in ‘Isle...
5 Essential Films at FIAF’s ‘Animation...
Review: The Rape of Recy Taylor