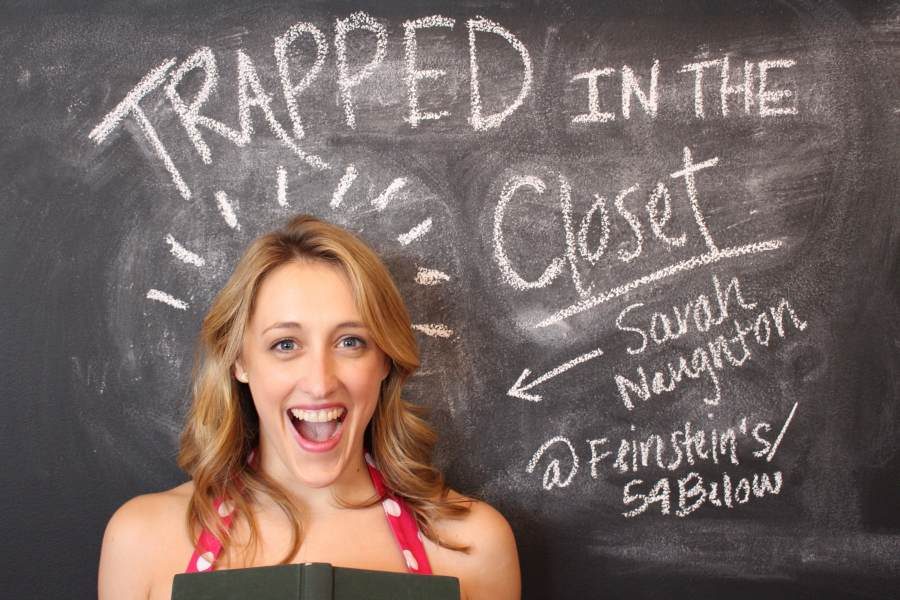 Actress/comedian/audiobook narrator Sarah Naughton is back at Feinstein's/54 Below with Sarah Naughton: Trapped in the Closet, a heartfelt, hilarious, autobiographical show in which she sings about her peculiar career. We caught up with her to learn more about what she has in store.

What's the one essential item you keep in your recording closet (besides the tech equipment)?

Battery operated twinkle lights! It can be super gloomy in a closet with just the glow of the computer monitor. As soon as I put some lights in there, everything changed for me.

When do you know you hit it out of the park with one of your recordings?

Narrating an audiobook can be really tedious. Everything has to be word perfect, pronounced correctly, with no extra sounds, no super loud breaths, so there's a lot of stopping and starting. But sometimes I just get into a flow and I'm going through page after page with no mistakes and I'm really present with the emotional life of the story. Those moments are rare, but it's a great feeling when they come because I feel like I'm nailing it. Also occasionally really nice authors will write to me to tell me that they love the job I did with their book, and that always feels great. I'm always happy when they feel I've done their story justice.

Do you have a secret formula to prepare and take care of your voice?

Recording books is very demanding on the voice. And adding singing on top of it is asking a lot. So I have many little gadgets and tricks. Number one is to drink a ton of water and tea. Staying hydrated is key. And I have a personal steamer, the mypurmist, which is, I believe, the cadillac of personal steamers. When it's crunch time I take bromelain supplements which are good for inflammation. And when I can I try to work in some silent time and lots of sleep. Rest and recovery go hand in hand!

What book would you pay to be able to record?

Sweetbitter by Stephanie Danler! I love the book and so relate to the story. It's a coming of age tale about a young woman who moves to New York and gets a job at a fine dining restaurant. My first job out of school was waiting tables, and I grew up a lot in that restaurant. Plus I live to eat and drink. So getting to describe all the food and wine the protagonist tries would be so fun Sweetbitter is an incredible book. If you haven't read it, you should!

What was your favorite bedtime story to have your parents read to you?

Both of my parents used to make up stories to tell my brother and me at bed time. My dad created a whole series that he told us in installments called, "The Missing Letter," which was about a young boy and girl (my brother and I) who went on this incredible adventure all over the world to retrieve a, you guessed it, missing letter!

Who do you wish would read to you now?

Is it too cliché to say James Earl Jones? "Sarah...I am your Father..."

What's it like to sing your own songs along with classics from the Broadway shows you do?

It's awesome! Jake Weinstein, my collaborator, is such an incredible composer, his music completely holds its own with the Broadway selections. I think someone who didn't know for sure, wouldn't be able to tell which was which.

What's the biggest challenge in finding songs that fit an autobiographical show?

Well we kind of cheat because once we find a song that has the captures the idea of a moment in the show, we change the words so it fits exactly! But that does mean that we need to be super clear about what we want to say during each number, and where I am in the story of the show.

If your closet was as big as Feinstein's/54 Below what would you fill it with?

Oh man that would be awesome! I would put a bed in there for naps for sure. A TV for breaks. And a candy bar and a fridge for seltzer water. A tea station. And plants for color and oxygen.

For more information on Sarah Naughton: Trapped in the Closet click here.